Breaking News
Home / Opinion / Editor / Op-ed on Pavlos Fyssas murder: dangerous political game that backfired and got out of control

Op-ed on Pavlos Fyssas murder: dangerous political game that backfired and got out of control

Αll signs show that it was a cold-blooded murder. Eye witnesses speak of a car that drove the one-way street the opposite direction, that assailant came out of the car and stabbed the victim twice. 34-year-old anti-fascist and rapper Pavlos Fyssas died short after the stabbing in the hospital. 45-year-old Giorgos Roupakias was captured by the police short after. Police found the knife nearby. It was thrown away. Fyssas’ blood was still on it.

Doctors of the hospital where Fyssas was taken have apparently said that “there was obvious attempt to turn the knife inside the wound.” Doctors spoke of a “professional stabbing”, Greek media report.

Controversial are the testimonies concerning the role of the police: some eye witnesses claim the murder happened with the police standing nearby, the police say that the motorcycled units arrived at the crime scene just a minute and a half after the stabbing.

The majority of details of the heinous murder in Keratsini being currently reported by the Greek media are based on eye-witnesses testimonies.

Perpetrator and victim did not know each other. Roupakias was not even present at the cafeteria when a kind of quarrel had allegedly broke between a group of Golden Dawn supporters and Fyssas and his friends.

Conclusion is close that Roupakias was called in to the scene, to support his ideological fellows.

Roupakias confessed the crime. Furthermore, he allegedly admitted he was a member of extreme-right Golden Dawn and that he was visiting the local GD office in Nikaia suburb of Piraeus five to six times a week.

During a home search police found a taser, a glob and print material of the neo-nazi party.

When Greek media started to report on Wednesday morning about the link between the stabber and the extreme-right, Golden Dawn became furious. Its media representative Ilias Kassidiaris condemned the attack, dismissed any claim that the party had any connection to the murder and spoke of “miserable sycophants”. 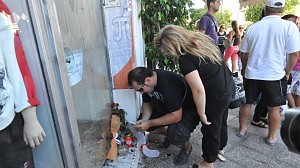 Keratsini: People lay a flower, a note, a candle where Fyssas was murdered

But Minister for Public Order and Citizen Protection Nikos Dendias, defied GD protests and ordered police units to raid several offices of Golden Dawn – the headquarters incl – in the broader Athens area. What the policemen were looking for? “For anything….” a journalist said on a private television channel.

Most probably police was looking for anything that could link Golden Dawn , a party elected to the parliament in June 2012, with illegal and unconstitutional activities.

Coalition government parties Nea Dimocratia and PASOK are alarmed. What it was ‘tolerated’ from the side of the government (Golden Dawn members attacks and stabbing of migrants, attacks against Communist party members, interventions at anniversaries of victims of the German Nazis during the WWII, humiliation and swears against the whole political system and the democratic procedures and thus inside the Parliament) now seems to have gotten out of control.

Just hours after Fyssas’ stabbing, Minister Dendias announced the expanding of the laws on criminal gangs and training of armed groups and called all parties of the so-called “Constitutional Arc” to join forces against the Golden Dawn.

It looks as if it needed the life of a young man for the state to wake up and seek to take some actions against the fascists.

When the left opposition (SYRIZA, Communist party) but also government party PASOK were ringing the alarm bells asking measures against the Golden Dawn, Nea Dimocratia was seeking political gains and was heralding the ‘theory of the two poles: the Golden Dawn on the right and SYRIZA on the left’. Samaras’ part would put both parties in the blender and push the button.

Not so long ago, some ND lawmaker had proposed the cooperation of Nea Dimocratia and Golden Dawn. and just last week a prominent journalist of a conservative media outlet had brought back the idea claiming a “cooperation of Nea Dimocratia with a more serious Golden Dawn should not be excluded”. The journalist had certainly not in mind bad jokes circulating from the side of GD. But rather a less provocative, less violent neo-nazi party.

The lawmaker and the journalist were certainly going on touching distance and check the reaction of public opinion in the perspective of a future government coalition between Samaras’ and Michaloliakos’ parties. Together they could get more than 44% in future elections. In every public opinion survey, Golden Dawn comes third in respondents’ preference after Nea Dimocratia and SYRIZA.

“The theory of two poles” in practice was translated into trivializing the extreme-right Golden Dawn and criminalizing left-wing SYRIZA.

Tolerating GD by not openly condemning it

The attacks against migrants were mostly not reported on television, only a violent death could break through the news. Swears of GD lawmakers at the Parliament’s plenary would be omitted from the session minutes. GD charities (food distribution, blood donation) for “Greeks only” would be covered with a displayed ’embarrassment’. But there was never a real discussion in the public agenda.  GD interventions at event to commemorate killing of Greeks by the German Nazis would be condemned only half-hearted. If at all.

It was mostly absence of criticism and – what it seemed – silent tolerance from the side of mainstream media.

The Golden Dawn had entered the Greek living rooms as a phenomenon indirectly being accepted because it was not clearly and loud condemned.

A dangerous game that now has backfired. By the knife of Roupakias.

I could hardly believe that some high party official picked up the phone and ordered the killing of  X-migrant, the beating of Z-Pakistani or the stabbing of Fyssas.

But agitation- and hate-ideologies can arm the hand of a devoted supporter like Roupakias. Who was bold enough to stab Fyssas in cold blood and thus in front of witnesses. Who most probably also thought that he would go unpunished as many of his ideological fellows who escaped charges because the state was not strict enough, because the police was reluctant.

There is still time to restrict the audacity of thugs – before it’s really too late.

PS Pavlos Fyssas was a rapper, a unionist and member of anti-capitalist ANTARSYA, a part that has occasionally cooperated with SYRIZA.