Angela Merkel: instead of Thanking Greeks she reassures, she will continue pressure

What it looks to be a Turkish Doner is in fact a Greek gyros. German Chancellor Angela Merkel, the sweeping winner of German federal elections demonstrate her savvy skills, her absolute capacity to deal with a sharp knife and cut Greek gyros into thin slices thus with a surgical precision. 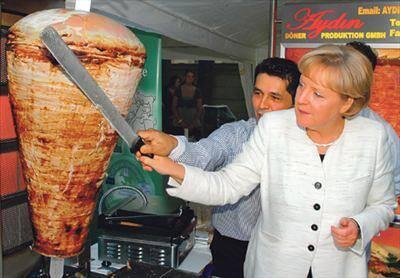 Right after her historic victory, Angela Merkel reassured her voters that she will keep the pressure on Greece to carry out reforms.

“We should not stop exercising pressure for the agreed reforms to be carried out,” said Merkel after a major election win for her CDU party and its Bavarian partner, the CSU.

Merkel also insisted that she told the truth about Greece’s predicament and the possible need for a third bailout, which was brought up during the election campaign by Finance Minister Wolfgang Schaeuble.

“This is not a new issue and we raised it repeatedly during the election campaign,” said Merkel, adding that Schaeuble had first raised the matter before a parliamentary committee in November 2012.

Merkel’s Christian Democratic bloc took 41.5 percent to 25.7 percent for the Social Democrats of Peer Steinbrueck in yesterday’s election, according to results from all 299 districts. That leaves her short of a majority and needing a coalition partner to govern Europe’s biggest economy. (ekathimerini)

Certainly some Greeks are happy to see Merkel has won the elections and that the course of selling out the debt-ridden country and its assets, the course of citizens’ squalor will continue.

Some other Greeks are certainly unhappy and hope a possible ‘grand coalition’ with the Socialdemocrats of SPD could lessen the pressure of Merkel’s thumb.

But I am sure that all Greeks were expecting that Angela Merkel would speak at least one word of appreciation, even a whispered “Thank You” to austerity-ridden citizens and eager-to-collaborate government as they helped the German chancellor to exploit them for her election campaign and sweep the votes of German petty bourgeoisie.