Greek government, state and authorities are set on alert after a union of a union of Greek army reservists of Special Forces (KEED) issued a statement urging the Greek administration to step down and make way for a national unity government. The statement, posted on the union’s website on Wednesday, triggered an emergency meeting at the Supreme Court on Wednesday evening and a prosecutor’s investigation on Thursday morning. 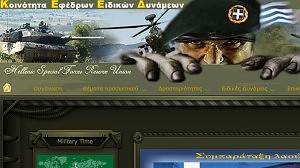 The KEED statement said that the coalition government must resign after failing to live up with a constitutional pledge to provide work, health, education, justice and security for all citizens.

The statement included 15 demands, including the resignation of Greek President Karolos Papoulias, and it urged people to join hands with the army in a open gathering to take place upcoming Saturday, September 28th 2013 at Syntagma Square outside the Greek Parliament.

Among the 15 demands are:

-immediate resignation of the government

-resignation of the president

-national unity government under the President of Supreme Court and personalities of renowned principles but outside the political scene as well as counselors of the Academy of Athens.

-suspension of the austerity loan agreement

– establishment of a Constitutional Court

– investigation committee consisting of high ranking judges who will investigate who and why brought the country to this stage as well as rendering of accountability.

-suspension of further taxation to annual income up to 25,000 euro.

-stop of lay-0ffs in the public sector.

-suspension of auctions and bank claims until the Completion Audit of Banks by Certified Public Accountants and accountability.

– denouncement of the odious debt.

-prohibition of sales of public property and resume operation of Defense Industries.

-lifting of the lawmakers’ immunity.

-the control of assets  of those involved in economic positions of government , prosecute illicit enrichment and return to the state Efficiency to the State.

– protection from Hostile Elongation at the Aegean Sea, Macedonia, Epirus , Thrace and Cyprus , with parallel suppression of various groups operating in these areas.

-removal of illegal immigrants with a parallel promotion in European countries. Ban the of money transfer abroad more than 20% of their (immigrants) taxable income.

The KEED sees the Armed Forces as institutional warrantor of all the above demands and calls on security forces to secure the implementation of the above and the smooth transfer to actual constitutional legality.” (source)

The statement was interpreted as a call to a “coup d’ etat” with the joint-action of army and citizens. Not a few show also a link between a “nationalist” KEED and extreme-right Golden Dawn.

Earlier today, the KEED dismissed claims it had called for a coup d’ etat and any links to Golden Dawn. In a new statement uploaded on its website, KEED declared:

” We did not expect better treatment from the systemic TV / radio networks and some blogs on internet. With fragmented or a synthesis of isolated sentences from the Declaration and the arbitrary interpretation they tried to characterize us as potential coup initiators. We do not know that coup d’ etats are announced in advance, the corresponding legal characterization lacks seriousness.

The reference to the Armed Forces and Security Corps are apparently unrelated to a coup or any other unconstitutional actions of any side. We remain with the acceptance of our proposals by Greek people as manifested in many messages.”

While the state authorities are alarmed, Greek internet users found the chance to make fun of the possible or impossible threat to Greek democracy, … “the upcoming coup d’ etat. Greeks  created a hashtag on Twitter #praksikopima_Sept28. The majority of Tweeps declared they had other plans ( weddings, hairdresser visits, cocktail parties, outdoor activities, supermarket purchases, dinner with granny etc) for Saturday, September 28th 2013 and requested that the coup would be postponed on a later date.

“I wonder how they would do it as there no spare parts for tanks to roll,” wrote a user

with another one proposing “They should stage the coup on bicycles”