In a huge operation launched by judicial authorities and police, Golden Dawn leader Nikos Michaloliakos, party spokesman Ilias Kasidiaris and several other MPs have been arrested on Saturday morning. Greek media report that a total of 36 arrest warrants against MPs and local branches officials have been issued.

The operation started in the early morning hours of Saturday with the arrest of Michaloliakos, the arrest of Kasidiaris followed. Operation is continuing.

The recent investigation against the extreme-right party has reportedly found “solid evidence for the  establishment of a criminal organization”, which is a felony.

In case of a felony the parliamentary immunity of MPs is automatically lifted and there is not reason for a voting in the Parliament.

Head of GD Nikaia branch Giorgos Patelis (the area where leftist rapper Pavlos Fyssas was stabbed to death on September 17, 2013.

GD website called its supporters to react in solidarity with the members’ arrest.

So far there have been 14 arrests (MPs and other GD members).

Golden Dawn has 18 MPs in the Parliament.

There is information that two active policemen are among the GD arrested members.

The charges as of prosecutor of Greece’s Supreme Court:

still to be investigated:

– whether the GD leadership and MPs were involved in the murder of Pavlos Fyssas.

On Friday morning the department director in charge of Golden Dawn surveillance within the EYP was suspended from his duty.

It was found out that he was a cousin of a GD MP. He was assigned to this post a year ago. (Golden Dawn entered the Parliament with June 2012 elections)

The man, whose name was not published, was allegedly also involved in the operation of “abduction” of several Pakistani men in 2005 in connection with terror attacks in London.

The state never admitted there was such incident.

fugitive GD MP Christos Pappas on Real FM: ” I ​​move freely. I did not see anyone. The occupation government makes unprecedented criminal charges against deputies and time will come where it will have to answer in front of the people . This government is a criminal organization that in cooperation with the troika destroys the homeland. Antonis Samaras is trying to plunge the country into chaos and civil war . This will not happen . ”

17 arrested so far. All accused of involvement in a criminal organization. Still on the run MPs Pappas and Michos.

A growing number of GD members have gathered outside the police HQ in solidarity with the arrested after several Golden Dawn websites called them to do so.

Prime Minister Antonis Samaras is due to leave Athens for USA today. Not clear if he will make a statement on the Golden Dawn crack down.

The arrest of GD leader Nikos Michaloliakos occurred at 6:30 am at his home.

The arrest was followed by an extensive home research by the counter-terrorism department.

Media report that three pistols were allegedly found in the home of GD leader, with Michaloliakos being unable to justify whether he was in legitimate possession of the pistols and when he got them from.

Offenses against Golden Dawn members, according to the 9-page findings of  Supreme Court prosecutor:

The 9-page findings report refers back to the course of a criminal organization consisting of members of Golden Dawn.

Testimonies and lifting the telephone privacy apparently give solid evidence for the offenses.

“Chief of the organization is Nikos Michaloliakos, Christos Pappas is deputy chief,” says the findings report.

GD members apparently refered to Michaloliakos with “Führer Prinzip” ( “Führer” German attribute to Hitler; “Führer Prinzip” English “Leader principle” according to which the whole organization has only one leader).

MPs Kasidiaris and Lagos belonged to the “hard core” of the organization.

Strong evidence is being reportedly given by the phone surveillance of GD politicians and members who allegedly spoke on the phone of specific facts, persons, things and situations.There are apparently also other people – not GD members- involved in the organization.

Yesterday, Greek media had claimed that “businessmen who were supporting GD with money were  members of the entertainment sector.”

Leaving his office to head to the Athens airport, Prime minister Antonis Samaras did not make any statement but briefly told reporters “Justice, stabilization, no elections.” (Skai TV)

Skai TV reported that the lawyer of Fyssas’ murderer visited police headquarters in order to speak with one of the arrested. Not clear if the lawyer of Giorgos Roupakias will speak with someone from GD leadership or Nikaia branch members.

When Roupakias was arrested immediately after stabbing Fyssas to death, Greek media reported that local GD officials pretended they had nothing to do with him and that Roupakias was just simple member.

a big number of bullets and cartridges

Arrested Members of the Parliament are not automatically deprived of their parliamentary mandate, even if are charged with felony offenses.According to the definition given by Parliament statute and the Constitution, the MPs of Golden Dawn retain his parliamentary status even after their arrest .The MPs lose their mandate only if there is a Justice decision to deprive them of their civil rights, a decision that normally follows a court sentence.

Speaking to news portal zougla.gr,  lawyers explained that when it comes to a criminal organization , especially the leader but also the members face prison terms of 10 to 20 years.“When it comes to felony,  parliamentary immunity is being bypassed. Participation in a criminal organization is a felony. However, what evidence the prosecutor has and how the prosecutor will proceed, we do not know. We must be cautious,” a legal adviser said.Two days ago, Golden Dawn had threatened to resign from Parliament in order to trigger early elections. Should the 18 GD MPs resign repetition elections will be held only in 15 constituencies.

However, before the repetition elections also those GD politicians on ‘second-best” election lists should not accept the Parliamentary mandate.

Golden Dawn MP Nikos Michos surrender to police short before 3 o’ clock. Michos first joined the GD members who had gathered outside police HQ in solidarity with the arrested GD leadership, greeted them and then entered the police building.

A warrant has been issued also for GD MP, Christos Pappas. He has not been caught yet.

Some media claim of “upcoming search in the Parliament offices of Golden Dawn” due to suspicion MP Pappas might have sought refugee there. 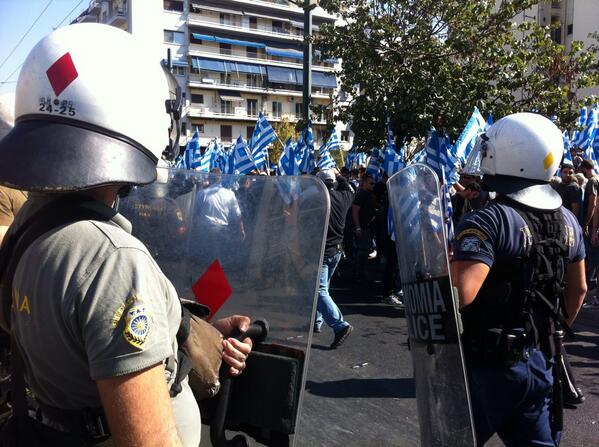 Solidarity without Golden Dawn symbols: 400-500 GD members still outside the headquarters of Greek police where the political leadership of the party and officers of local branches are held.

The cadres, much fewer than thought, carry Greek flags instead of Golden Dawn symbols. Neither do they wear the famous GD t-shirts.

Police investigation in the Golden Dawn offices at the first floor of the Greek Parliament was launched some minutes ago.

So far 19 people arrested, arrest warrants for another 13 Golden Dawn members not fulfilled yet.

Unconfirmed information claim MP Christos Pappas has contacted anti-terror police in order to surrender. He is allegedly expect to surrender in soon.

“”I’m proud of my father, as any child whose father is a victim of political persecution, should be. Nothing scares us,” daughter of GD leader Michaloliakos, Ourania, told the media after visiting police headquarters in Athens.

A couple of days ago and right after the judicial authorities started to move against Golden Dawn, Ourania Michaloliakos uploaded a message on social media calling “Golden Dawn members to die for the cause.”

Greek police issued a statement (16:33) saying that GD MP Giorgos Germenis is currently in police headquarters but that he was not arrested.

Nikos Michaloliakos and the rest of Golden Dawn MPs and members are expected to be soon transferred from police headquarters to Evelpidon court.

The transfer of the arrested Golden Dawn leader, several MPs and local branch members from police headquarters to Evelpidon court is expected to start soon.

Among the 19 arrested is also an active policeman of the motorcycled DIAS units.

13 more warrant orders have been issued, MP Christos Pappas, alleged deputy chief of the ‘criminal organization’ has not surrender yet.

None of the arrested had apparently any contact to lawyers but they were informed about the offenses.

Media report that six squads of riot police have taken place outside the police HQ in order to safeguard the transfer of the 19 arrested.

Transfer to court to start within seconds…

Minister for Public Order and Citizen Protection is expected to make a statement around 8 p.m. tonight.

Blog KTG follows the call of Saturday wild and will resume with latest news later today or tomorrow.

thank you for following our Live blogging.

You have been a wonderful audience – as always 🙂