In Greece of recession and IMF loan agreements reality of labor market has turned worse than in our worst nightmare. Employers not only pay their employees with up to six months delay. A new phenomenon has recently arose in the Greek labor market. Employees offer job vacancies and thus on voluntary basis. In times of debts, unemployment and desperation, EU citizens are forced to work not only for a piece of bread in a debt-ridden country with consumer prices remaining shameless high. Now, employees are requested even to work for no salary, to work for nothing. For no salary at all, on volunteer basis. With sole award for the desperate employee, being the bright perspective of being chosen the volunteer of the year.

I post some examples of the latest developments in the Greek labor market in hope that someone will address the European Court of Human Rights.

In Greece of brazen and savage capitalism, private interests and profit become places of wild exploitation of labor market and poor conditions, while at the same time they pander the noble cause of volunteering, an altruistic activity for the improvement of human life and the promotion of good causes.

A private company in Athens seeks volunteers for the Marketing Department, to work 9 am-5pm, at least four days per month.

In best cases, employers offer a meal and free accommodation, as in the case of a hotel on the island of Aegina. 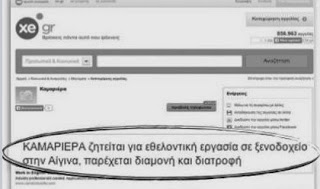 Work and return part of salary to employer

Employers seem to never run out of ideas when it comes to exploit working forces. A cleaner denounced last week that their employers was demanding back part fo their salary.

The woman was hired by a private company who had a contract with a public hospital in Athens. “They used to put on my bank account 800 euro every month, but a couple of days later two ladies would visit me and demand 200 euro in cash,” the cleaner told private skai TV. She added that this was the common practice for the whole personnel and that employers were forced to give back 200-300 euro depending on their salary.

Work and wait 3 months for salary

With the IMF-imposed abolishment of collective bargains, workers and employees in Greece are facing the deliberate new rules of the employers like six-day week, flexible working schedules, rotation work of 3 or 4 days per week, no allowances and overtime benefits.

One of the recent examples of the new morals in Greek labor market was signed beginning of November:

Employees at a security company were forced to sign working contracts according to which salary payment is legitimized to occur with a delay of 90 days!

“The payment of salaries for staff will take place within 90 days from the end of the month in which the work was given, either via transfer to employee’s bank account or in cash or in combination ot the two.” (imerisia.gr)

Work and get food vouchers

In Greece’s  international transportation sector a new collective bargain foresees that employees will be paid according to company turnover. If turnover is decreased in a period of nine months, salaries will be reduced by 4 percent. If turnover is increases, a bonus in form of cash or food vouchers will be given.

And you know what’s most weird and shameful in the whole situation? That the Greek public sector, the state that is deep in debt, still keeps paying higher salaries and higher pensions than the private sector.

PS and if we don’t end completely broke by 2014, we will live to admire the new Greek success story…