At least seven migrants, among them two children, were drowned when the boat trying to carry them illegally to Greece capsized off the island of Mytilini in the early morning hours of Tuesday. While a search and rescue operation is under way, there are fears that the number of dead would increase. The shocked survivors were not able to inform the authorities about the exact number of people on board, Greek media report.

It all began at dawn when the freighter ”Edcem” with Turkish flag found two migrants swimming in the sea. According to information from the operation center of the Greek Coast Guard, the freighter picked up the migrants who claimed there were another 15 people on the boat that half-capsized under unclear circumstances. A total of 17 people were on board, the survivors said.

According to survovors’ testimonies, they had left the Turkish coast and that at some point the captain had abandoned the boat that capsized.

So far, eight people have been rescued, while the Greek coast guard recovered the bodies of seven migrants. Among the drowned were two children and three women. some were found in the sea, some were trapped inside the boat.

Survivors were taken to the islands hospital. 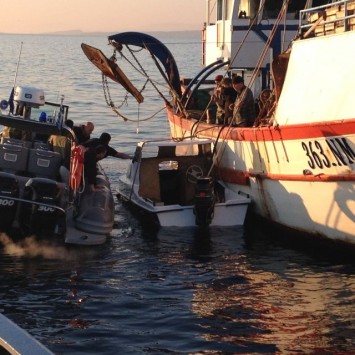 The incident occurred some nautical miles off Korakas Cape of Mytilini.