A first class political scandal is shaking the Greek coalition government after Golden Dawn released footage of a friendly chat the extreme-right party had with the secretary of the government Panagiotis Baltakos. According to the recorded conversation and the footage transcript Baltakos allegedly claimed that the political persecution of Golden Dawn was launched in to order to stop Nea Dimokratia voters from switching to Golden Dawn and that two ministers were interfered in judiciary. 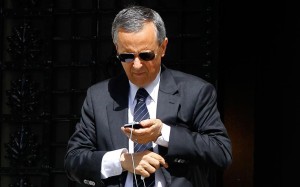 It is not known whether a third person was taking part in the conversation between Baltakos and Kasidiaris and who recorded it with a secret camera.

Video: the sound is not very good but click transcript link below

While Samaras’ party was thinking ways to handle the so-called “Baltakos-gate”, junior coalition partner PASOK demanded that the general secretary would be removed from his position.

Short after 4:30 p.m. Baltakos submitted his resignation to prime minister Antonis Samaras. He said he was sorry in two pages. Panagiotis Baltakos was appointed to the position of the general secretary of the Cabinet.

Media report of the possibility that there was also a second part of the footage that has not been released by Golden Dawn.

Conservative  -and according to his own words “born anti-communist” – Panagiotis Baltakos was a close aide of PM Antonis Samaras.

Video from the Parliament corridor after/while the beating

The Marine Ministry ordered an internal investigation as Dimitris Giorgos Baltakos is officer at the Greek Coast Guard.