At least 22 migrants were drown off shore of the island of Samos when the boat carrying them to Greece sank. Among the victims are four children, six men and twelve women – some of them pregnant, others holding their children in their arms.

The incident occurred in the early morning hours of Monday 4 nautical miles off Samos, when a what local media describe as “luxury yacht” started to take in water and sink.

Panic broke out and many migrants jumped into the water whether they knew swimming or not. Some unfortunate ones remained trapped in the yacht’s bow and went under with it.

A Frontex boat reportedly got aware of the incident and hit alarm. 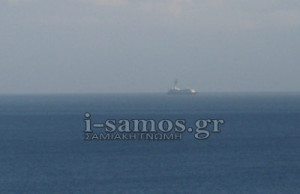 from the rescue operation

The yacht followed by a smaller boat was bringing illegally migrants to Greece. When the yacht started to sink, also the migrants on the smaller boat jumped in the water. More than 65 people were on board of both boats.

The search and rescue operation is still under way with the additional assistance of a Super Puma helicopter. The number of victims increases by the hour.

Rescued migrants are in the hospital of the island.

Speaking to private Skai TV in the afternoon, a diver said that they had found 18 bodies trapped inside the yachts bow. “There was no visible reason for the accident, there was no leakage or a hole” he said adding that the 120meter-long yacht was “overloaded” and he implied that for some “unknown reason the people moved to one side causing the boat to capsize.”

Migrants trying to reach Greece illegally often fall victim of their own dreams and exploitation of human traffickers.

!2 injured when bus crashes on private car in downtown Athens