First Instance Court in Athens ruled that the Finance Ministry has to hire anew the 397 cleaners it had laid-off several months ago. According to the court, the finance ministry decision to sent home 397 cleaners in the context of ‘mobility scheme’ was illegal and unconstitutional as it occurred without previous evaluation of their work.

The “mobility scheme” sends home civil workers with 75% of their salary for a period of eight months. Then the personnel is fired. 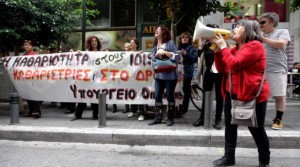 Cleaners have been protesting outside the Finance Ministry for weeks, whereas clashes with riot police could not have been avoided. 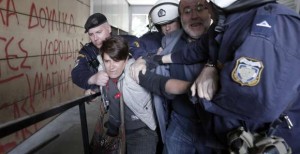 397 cleaners at the Finance Ministry had appealed against the decision that had affected a total of 465 people.

While the court ordered the new hiring of the personnel working for 500-600 euro per month, it is not clear yet whether the court order is provisionally enforceable.

The cleaners’ lawyer Yiannis Karouzos described the court ruling as a “landmark decision” as it puts in question the “mobility scheme” that proves to be absolutely unconstitutional.

Under Troika-pressure to lay-off more than 20,000 civil workers in two years, the Greek government had decided the easy solution: the mobility scheme that made people jobless over night.

Ι suppose other sectors of civil workers like the “school guards” have gone to courts for being on “mobility scheme” over night.