Do you wonder why you don’t find foreign newspapers and magazines in Greece? The reason is simple: the Foreign Press Distribution Agency in Greece went bankrupt and announced the suspension of its works.

According to daily Imerisia,  the company has debts €748,509 to social security fund IKA, €3.5 million to several suppliers and €3,538 to the company leasing vehicles.

FPDA has reportedly asked  the owners of  distribution points to proceed to liquidation.

The company has been distributing 4,000 foreign magazines and 20 foreign newspapers

According to rumors, a Cypriot businessman has expressed interest in purchasing the FPDA.

However many distributors consider the “summer season as lost” arguing that many magazines and newspapers will not return back on their stands before September.

Much to my knowledge The Foreign Press Distribution Agency was established in the 1970’s.

PS I hope tourists visiting Greece this summer will come with their tablets, laptops and iphones or learn Greek and read the local press… 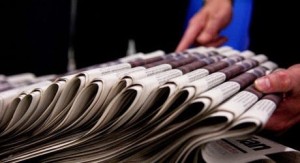