Two seem to be the key features of Greece’s new Finance Minister Gikas Hardouvelis: that he knows the euro mechanism and he knows the banks.  Hardouvelis is a professor of Finance & Economics at the University of Piraeus and Cheif Economist and Director of Research at the EUROBANK. He served two prime ministers: PM Costas Simitis from 2000-2004 as Director of the Economic Office and PM Lucas Papadimos Nov 2011-May 2012 at the same position. Therefore he also knows a lot about the PSI – the Greek Bond Swap in March 2012. 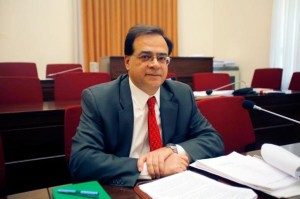 There is not much to say about Greece’s new Finance Minister Gikas Hardouvelis, except some information taken from his CV as posted on his own website.

Gikas A. Hardouvelis is a Professor of Finance & Economics, Department of Banking and Financial Management at the University of Piraeus and Chief Economist & Director of Research, EUROBANK Group. Recently he held position of the Director of the Economic Office of Greek Prime Minister Lucas Papademos (Nov. 2011–May 2012).

Member of the CIIM Academic Council, the Board of Directors of the Foundation for the Economic & Industrial Research, and member of the Academic Council of the Hellenic Banks Association & its EMAC-EBF representative. He is also Research Fellow at CEPR & CMBI.

During 2000-2004, he was Director of the Economic Office of Greek Prime Minister Costas Simitis. He has extensive banking experience: FRB New York (1987-1993), Bank of Greece (1994-1995), where he also acted as Second Alternate to the Governor at the European Monetary Institute, Chief Economist at the National Bank of Greece (1996-2000). He played a critical role in the establishment of the Athens Derivatives Exchange, as an original member of its Board of Directors (1997-2000).

His academic work extends in Finance and Macroeconomics and is published in journals including the American Economic Review, Journal of Finance, Quarterly Journal of Economics, Journal of Monetary Economics, etc. He was included in the Hall of Fame of the top-50 individual publishers worldwide in applied econometrics over 1989 to 1995. (hardouvelis.gr)

After Stournaras, Hardouvelis is the second Finance Minister coming from the environment of Costas Simitis.