Six Greek women dressed in white togas launched an original protest  to draw attention to a Greek issue: the return of Acropolis Marbles to Greece. The group under the lead of renowned soprano Sonia Theodoridou wandered through the corridors and halls of the British Museum in London in search of their “lost sister” – the sculpture of a Caryatid. 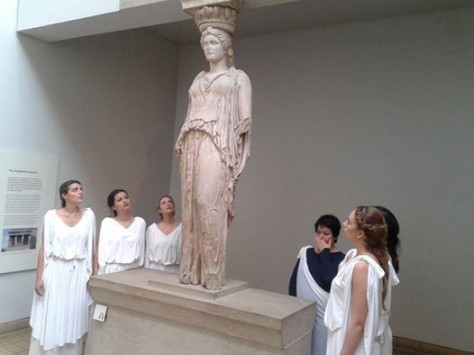 “The silence that surrounded us when we entered the museum is unforgettable.  Thousands of people who stood there, sidelined with awe, letting us to move forwards. Once they saw us, they all remained silent. The only sound to be heard was the photographers’ camera ‘clicks’.  And the guards, who at first tried to stop us, they stepped aside and accompanied us throughout the duration of our stay in the museum, some even saying Theodore [her husband], that they were also in favor of the return of the sculptures to Greece.”

Speaking to Greek Athens News Agency, Theodoridou said that the artistic protest action was aiming to draw attention to the return of the stolen Marbles to their homeland. “We are artists, we are not politicians. We have not big power but what we did in the British Museum showed us that we can very well do something and thus something very big,” Theodoridou stressed proud of her action.

After the protest inside the Museum, the group moved to a corner of Hyde Park where the women urged the Britons to “help the Caryatids return to the country were they were born. 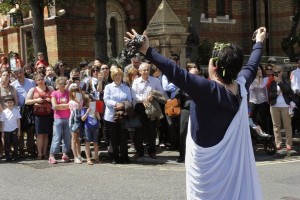 The protest ended with a music-theatrical performance on the street outside the Agia Sofia Church in London.