Two protesting cleaners and photo-reporter Tatiania Boliari were taken to the hospital after they were injured during clashes with riot police outside the Finance Ministry in downtown Athens. It was three riot police squads in full uniform and equipment against 50 unarmed protesting cleaners. Pushes from both sides had the effect that many women, mostly over 45 years old, fell on the ground.

Bolari was covering the cleaners’ protest when tension rose between riot police and protesters, the crowd started to run and Bolari fell down. According to eye-witnesses, a group of riot policemen took advantage of her situation and started to kick her. She was taken to the hospital, when she is undergoing medical tests.

Also photo-reporter Marios Lolos was injured but he refused to visit the hospital. 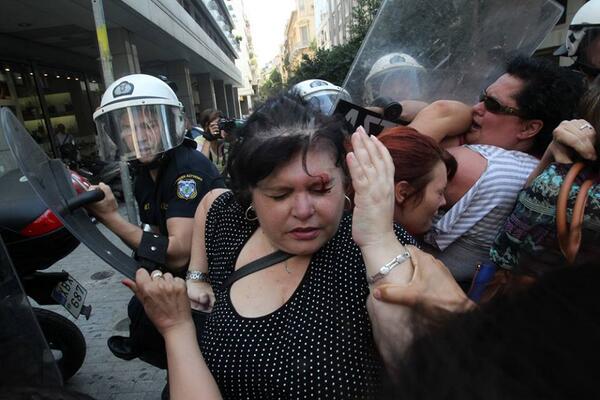 Both Bolari and Lolos were beaten by riot police during anti-austerity protests in 2011 and 2012.

PS I’m not sure whether riot police is following orders of the old Minister for public Order Dendias or the new Minister Kikilias is still trying to find out how the public order towards unarmed protesters works.