Black Rock warns “Greece most likely to default” and nobody cares

July 22, 2014 Economy Comments Off on Black Rock warns “Greece most likely to default” and nobody cares 87 Views

Look what happened after four years of economic war and heavy bombardment with news about the imminent bankruptcy of Greece – a disaster that never came, because the country was bankrupt anyway.  An economic report warning of Greece’s bankruptcy risk is being released and we simply don’t care. No panic in prime time news, no bank run… We are either desensitized or we are privately totally bankrupt – we sleep on park benches, eat at soup kitchens,  have no real estates and pay no taxes. And as PM Samara’s free Wi Fi has not been established yet, we have also no access to the news…

I have no other logical explanation.

In a list of 48 countries, Greece was proud to hold position 48th. That is our beloved country with the beautiful beaches on sale faces the highest risk to default.  But we are not alone. Together at the bottom of the list, we are in the same group with Portugal (47), Italy (44), Ireland (43) and  (40).

The index is based on countries’ gross domestic products, tax revenues and qualitative assessments such as the perceived effectiveness and stability of governments. The report was based on date from April-May-June 2014.

I read today that Italy’s sovereign debt is over 2 trillion euro, that is a debt equivalent to 135.6% of GDP. That’s a very lot of money to owe, even if it is in bonds and treasury bills and not in coins and 500-euro bank notes.

Greece’s sovereign debt is 174.1% of GDP.Greek media do not report how much money is exactly this debt.

Eurostat said that the eurozone’s most indebted country is Greece despite the fact that the country was twice bailed -out and underwent a “haircut”.

Greece tops the list of eurozone indebted countries and is followed by Italy. In reference to GDP our debt is higher than that of Italy.

Italy is a country that has production and exports. 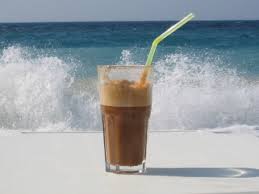 Greece produces coffee-in-the-glass  and souvlaki. Both items can hardly be exported, because they will reach the customers in inappropriate temperature and texture. There is no way to export Greek frappe and souvlaki to China or Germany.

Therefore, we invite tourists from these and other countries to come to Greece and drink their frappe or eat their souvlaki here. That is our biggest import-export achievement: the tourism.

At the very end, we produce and export nothing and we import everything, consumers included.

On the other hand, the government heralds that one day we will be the Number One target of investors. So far, the few foreign investors that appeared from around the corner vanished in the air after a few talks with the local officials. I cannot tell you what went wrong and not a single euro was invested in our beautiful country with the beautiful sun, the beautiful beaches and the beautiful souvlaki. Although I have here and there some kind of suspicion and hunch.

But in Greek government we trust, I can tell you that one day the crisis will be over, investors will come and we be as rich as never before.

That’s why we don’t care about bankruptcy news and other banalities like that. Because we have a government we trust and we know that Samaras & Co are working to save the country 🙂