Greek Police released a video footage shot by a thermographic camera from a police helicopter on Saturday night. The impressive footage shows the figures of several protesters on the rooftops of apartment buildings in Exarchia district of Athens, the center of riots and clashes on December 6th 2014.

The figures on the roof tops throw petrol bombs but also other objects to the ground, where riot police squads patrol and chase protesters.

It is the first time in the history of clashes between protesters and riot police that protesters sue this method of attacking police squads from rooftops. Last Saturday there were reports that people hurled petrol bombs against police from rooftops and balconies.

At 0’32” of the video, the people on the rooftops throw something heavy that Greek media describe as “professional refrigerator.” 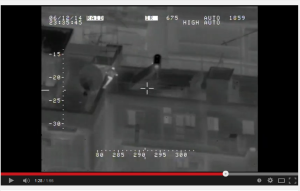 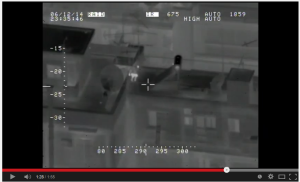 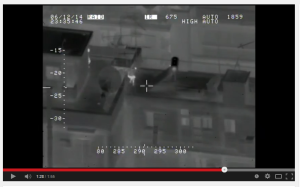 At 1’26-1’28”, the camera shows to people jumping from one rooftop to the next, with the two apartment buildings being not too far away form each other.

The video seems to be edited by the Police, and only one case of parkour is been displayed.

The video was apparently released after private ANT1 TV revealed in an exclusive story on Saturday that “anarchists were jumping from rooftop to rooftop” in a kind of new Greek version of “parkour”.

It wasn’t so much that the news seemed hard to believe but also the language the private network used to describe “300 anarchists functioning as air defense”, “air-to-ground war attacks”, “airborne battalion”, “flying paratroopers”, “anarchists’ commandos”.

“Many of the young anarchists jumped from building to building and from rooftop to rooftop, throwing Molotov cocktails from different points, leading eventually police chief officers and operation planners to consider two options. The first was to lift helicopter with light projector to “mark” the buildings with anarchists on the rooftops and then the police would raid the buildings and arrest them.

Ultimately, however, the police did not do anything of these options out of fear that the surprise attack could cause any kind of accident like some of the youngsters could accidentally fall on the ground.

Falling from the roof would give another dimension to the ongoing events.” (via Efsyn.gr)

The news triggered a storm or satirical and ironic comments on Twitter and in Hashtag #iptamenoi_anarchikoi“ (flying anarchists) Greek internet users revealed that imagination has literary no borders and boundaries.

“Parkour anarchists“, “Anarchour“, “A Anarchist and a Gentleman“, “Anarchists violate Greek air space“, “On next riots police will not close the metro only but also the Exarchia airspace” are just 0.01% of the comments.

Pictures of “anarchist” Batman or Mary Poppins you can see here.