Defenders of Austerity: Rajoy rushes to Athens in support of Samaras

Ten o’ clock sharp Spain’s Prime Minister Mariano Rajoy arrived at the office of his Greek counterpart Antonis Samaras. Οfficially the meeting is taking place in the context of bilateral relations, but Greek and Spanish media notes that the real aim of the visit is to provide support to Samaras, just 10 days before the elections.

“Samaras is facing an elections defeat that could complicate life for establishment parties across Europe,” notes Bloomberg in an article “Rajoy rallies to defense of EU austerity with Athens trip”  and stresses  that:

“A victory for Syriza could help consolidate support for parties like Podemos in Spain and Sinn Fein in Ireland that also reject the European Union’s focus on budget cutting to tackle the economic crisis.

“A Syriza government is bad in any case for Rajoy: if it goes well it will signal that Podemos is perhaps not as bad as they claim,” said Antonio Roldan, a London-based political analyst at Eurasia Group. “If it goes badly it could destabilize bond markets in the southern periphery.” (Bloomberg)

The two conservative leaders will hold a join press conference. Will Greek voters be impressed? I doubt it…. 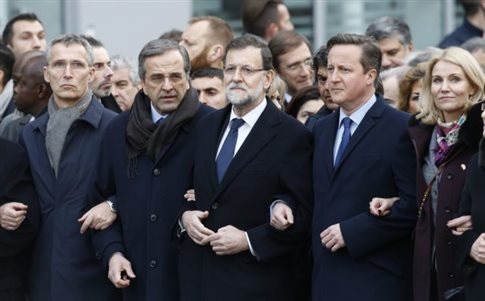 The two leaders have reportedly made the visit arrangements on Sunday in Paris as they were marching together against terrorism.