These are completely new customs and new practices launched in Greece. Alexis Tsipras sworn-in as the country’s new Prime Minister with a political oath and wearing suit but no tie. He was reportedly said recently that he would only wear a tie, when the “bailout program is gone.” Greece’s youngest Prime Minister entered the Presidential Mansion at 3:30 pm Monday and received the assignment to form a government by President Karolos Papoulias. 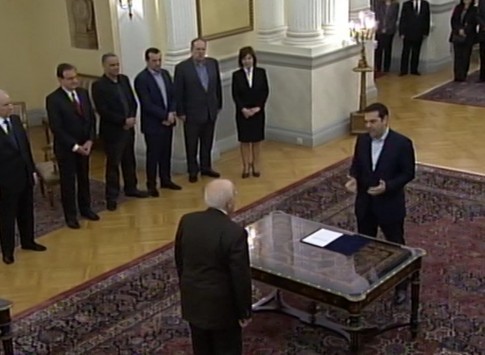 Half an hour later, Alexis Tsipras, 40, was sworn-in. His political oath was:

“I declare in my name, my honor and my conscience to obey the Constitution and the laws.”

He is the first left-wing Prime Minister in Greece, the first to swear-in with political oath and the first to attend such ceremony without a tie.

Before going to the Presidential Mansion, Tsipras had visited the Archbishop of Athens and All Greece to explain to him that he will not take a religious oath – and apparently that his presence was not needed today…

After the Presidential Mansion PM Tsipras made a symbolic visit to the mausoleum of Kaisariani where he laid a couple of red roses to honor the resistance fighters against the Nazis during the World World II.

No meeting between Samaras & Tsipras (!)

After Kaisariani Tsipras went to the Prime ministry Mansion to assume his new office.

Now, normally, PM Tsipras was supposed to meet with Antonis Samaras for the official transfer of the Prime Ministry.

However, former PM Samaras decided to have his close aide Bouras to do this apparently “very unpleasant” work. Therefore, PM Tsipras will sent his own close aide Pappas to the Prime Ministry.

Apparently Samaras neither wanted to shake hands with Tsipras, nor have a picture with him.

No wonder that grouchy Samaras never met with the leader of main opposition party and discuss the crucial issues of the debt-ridden country and austerity-plagued society.