Greece’s new PM Alexis Tsipras presented his government’s key priorities in the first meeting of the new cabinet on Wednesday. The key priorities include measures to tackle the country’s humanitarian crisis, restarting the economy and clashing with vested interests. However it is interesting to see also what he advised his ministers when the cameras went off.

“Addressing the first cabinet meeting since winning a national election on Sunday, the leftist premier said he would negotiate with Greece’s lenders over the 240 billion euro bailout without any “catastrophic” clashes.

“Our priority is to support the economy, to help it get going again,” Tsipras said. “We are ready to negotiate with our partners in order to reduce debt and find a fair and viable solution,” he added.

Tsipras said the new government – a coalition between leftist SYRIZA and right-wing Independent Greeks driven by an anti-bailout agenda – would seek to fight corruption and enforce a fair tax system.

“We are not here to enjoy privileges and power. We want to change the way in which power is exercised,” Tsipras told his ministers while pledging a daily briefing for journalists.”(ekathimerini)

When the cameras were turned off, Tsipras reportedly adviced his ministers to refrain from travling business class (for flights lasting below 4 hours), to limit personal guards, assistants and consultants and the use of cars. He advice them further to “deal kind with public servants and cooperate with them”,  to be careful with their ethics and style.

PS of course,e he gives such advises: opposition from all kind of colors and ideologies have already stepped forward from “around the corner”. 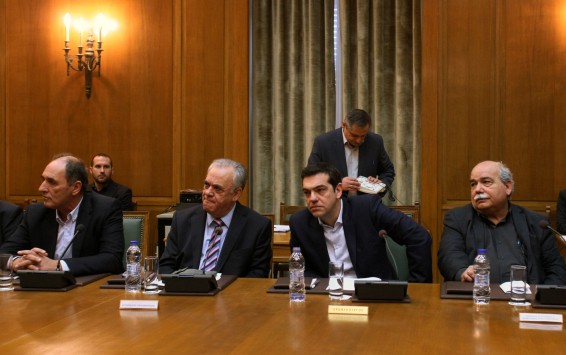