A new scandal alleging bribes totaling €62 million paid for armament contracts have been revealed by Deputy Defense Minister Nikos Toskas. The case involves two German companies, 12 Germans and unspecified number of Greek officials in the Defense Ministry.  Talking to To Kokkino FM on Friday, Toskas revealed that there is a legal document currently investigating by the political and military leadership of the country. 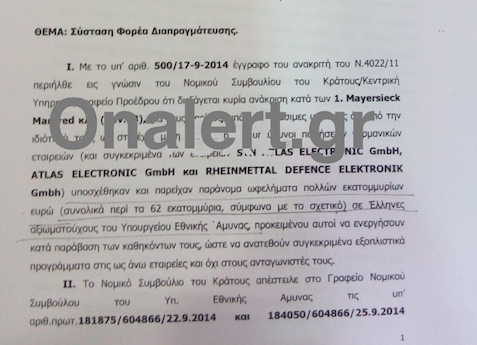 According to an exclusive story of defense news website Onalert.gr  that has obtained the legal document, the case refers to the German companies ATLAS ELECTRONIC GmbH and RHEINMETALL DEFENCE ELECTRONIC GmbH:

According to the document:
“the investigation is against [several names, one fully written, several others only with initials] and companies of German interests Atlas Electronic GmbH and Rheinmetall Electronic GmbH for having promised and distributed 62 million euro to Greek officials in the Defense Ministry so that they act in breach of their duties to assign specific defense programs to these companies and not to their competitors. “

The document has been issued by the Legal Council of the Greek State and states that the Greek government made a civil action statement to claim from each of the 12 Germans and one Greek the amount of €1,000,000 as “moral damage compensation.”

“The Greek government reserves the right to seek damage compensations from both the defendants and  the two companies.”
“The Legal Council asks the establishment of a committee consisting of officials with knowledge of the contracts to investigate the volume of the claims of the Greek government.”

In the three pages of the document uploaded by onalert.gr, there is no reference neither to a specific  armament contract for which the bribes have been allegedly paid, nor to a time period that the bribes changed hands. However, German media reported in November 2014, that the bribes paid by the two German companies to Greeks are being estimated between at least 35 million and up to 60 million euro, and that the case refers to the order of  4 Submarines Class 214 (2000-2002) by Ferrostaal/HDW Werft and of air defense system ASRAD  developed by Rheinmetall.
The legal action of the Greek State started already in September 2014, that is by the previous Nea Dimokratia-PASOK government.
Too many managers and officials, too many millions

Already in August 2013, German news agency DPA reported citing the spokesman of Bremen prosecutor  that  some 100 tax investigators raided the offices of Atlas Electronic and Rheinmetall Defence Electronic on suspicion to have bribed Greek officials and evaded taxes, adding that “the companies have paid some 9 million euros in bribes”. The report in German Manager Magazine refers to the corruption involved with the order and delivery of the four submarines Class 2014  Greece.

Former Greek Defense minister Akis Tsochatzopoulos has been found guilty and sits in prison to having received brides in order to approve armament contracts.
According to a report in German Deutschlanradio from 6. January 2015, the accusations refer to “13 former Atlas and Rheinmetall officials” and to Greek defendant is Panagiotis Efstathiou. Greek authorities have reportedly already sent notices to 13 German managers of the two companies, and that many of the mangers had already resigned from the companies.

“The bribes payments continued up to 2007: Atlas Elektronik transferred €8.5 million to a mailbox company of Estathiou in London,  Rheinmetall around € 9 million. In  2007  Rheinmetall buys the Atlas. At the end, Efstathiou received a total of €18 million. One half  he used to bribe Greek officers and civil servants for the purchase of an air defense system. The other half he kept for himself, and he even paid taxes for it.
But also the German armaments managers benefited from the deal. A small part from the money thought to bribe Greeks went back to the German managers of Atlas and Rheinmetall. Efstathiou transferred it on their private bank accounts.”

In a report of Sueddeutsche Zeitung of 13. January 2015,  there is claim that Efstathiou received €42million in the time 2001-2011.
Panagiotis Eftsathiou, 83, was representative of Rheinmetall and Atlas in Greece and he was also involvemed in the purchase of the air defense system ASRAD, Greek media reported. Part of the money was his legal commission. He is out on 500,000-euro bail.
Defense contracts vs Eurozone admission?
An article with title “State secret help for Greece” in German magazine STERN about the Euro entrance of Greece in 2000, recalls among others a claim that then German Chancellor Gerhard Schroeder allowed Greece to enter the eurozone despite the bad financial situation of the country’ economy, trading the euro entrance for armament contracts.

“In July 2014,  Greek business consultant Alexandros Avatangelos rose against the “Süddeutsche Zeitung” a far more serious accusation: The Greek accession to the euro was part of a coupling business with the German armaments industry was. Shortly after Greece was admitted in the euro zone with by Gerhard Schröder consent, the government in Athens ordered 170 Leopard 2 tanks by manufacturer Krauss-Maffei Wegmann and for about 2.3 billion euros ordered  submarines by the German HDW Werft (HDW ) in Kiel, now part of Thyssen-Krupp.
Greece bought the submarines, “so that we come into the euro,” Avatangelos claimed in the SZ: “The submarine mission was important for HDW and thus for the elections campaign of the SPD in the north.“This massive criticism still stands unchallenged in the room. If one poses relevant questions to  ex-Chancellor Schröder, one gets no respond.
The article was posted on 2. February 2015. (full article in German STERN)

Atlas Electronic for naval/marine electronics and systems was a joint venture of Rheinmetall and  UK BAE Systems, bought by Thyssen Krupp based in Germany and EADS based in the Netherlands in August 2006, it currently belongs to Thyssen Krupp and Airbus.
PS I suppose it will take a couple of decades to find out how many million were paid for bribes by Germany alone…