“Oh… Greece! I forgot, yes!” German chancellor Angela Merkel was talking like a waterfall about the Ukraine crisis, about policies and politicians… and Ops! She forgot Greece, the issue that is currently shaking the European Union, the Eurozone and the markets.

I don’t think, German Chancellor Angela Merkel was in a mood to talk about Greece at all, when she stood there together with US President Barack Obama for a joint press conference, on Monday at the White House. When journalists asked relevant questions and President Obama made a short reference urging for “growth”,  she kept stick to the minimum possible and chew the known “there are rules and agreements.”

Athens needs to present a “sustainable” plan to the Eurogroup, Merkel said with reference to the meeting on Wednesday.

“What counts is what Greece will put on the table at that meeting, or perhaps a few days later” and stressed that since 2010 Germany tried to keep Greece in the eurozone.

However, she said that the “basic rules” of the Greek bailout program by the European Commission, the European Central Bank and the International Monetary Fund “have always been the same.”

“You put in your own efforts and on the other side you’re being shown solidarity. A quid pro quo [“something for something”]. These programs are the basis of any discussion we have. I’ve always said I’ll wait for Greece to come with a sustainable proposal and then we’ll talk about this.”

President Obama made only a short reference to the Greek crisis and stressed  that he hoped to hear from Merkel how Europe and the IMF will work with Athens to bring the country back to sustainable growth. 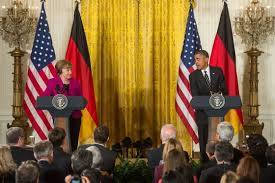