Eurogroup to meet in Brussels, Pro Gov’t rallies in Greece

February 11, 2015 Economy Comments Off on Eurogroup to meet in Brussels, Pro Gov’t rallies in Greece 64 Views

The extraordinary Eurogroup meeting on Greece today, starts at 5:30 pm Brussels time. While Dijsselbloem & Co will be talking “Greece”, rallies will be held in Athens and other cities with thousands expecting to voice support to the Greek side during the tough negotiations with its euro-partners and lenders.

Finance Minister Yanis Varoufakis is reportedly going to Brussels with a 10-reforms draft proposals for “a bridge program until August.” The Greek side hopes that the 10-points draft will be the base of negotiations on a desired agreement between Greece and the Eurogroup. However, one should note that no agreement or solution to the Greek debt is expected today.

A decision to whether they agree to agree or to disagree is most likely expected on the regular Eurogroup meeting scheduled for February 16th.

Messages from here to there and vice versa

Yesterday, I was trying to write a post about the several clear or hidden or even messages sent to each direction by several officials (Schaeuble, Moscovici, Tsirpas, Varoufakis, Dijsselbloem and others etc). It was impossible!

Taking into consideration that in such situations and before crucial negotiations politicians do not open their cards and that their messages always go in two directions, i.e. to voters in their countries and abroad, I decided it would have been rather a waste of my time to try to catch up with the secret meaning of any well covered statement, to analyze every dot, comma or semicolon and write a long list of motives and behavior patterns. I gave up!

At the same time, it was interesting to observe some Anglo-saxon media how they were trying to manipulate – what I first thought- the agenda of today’s talks. But at the end, it was rather that they were trying to manipulate the markets by picking a sentence told by X, adding a phrase told by Z and creating a totally reality-distorting Y. But that’s the game when it comes to economic interests, taking advantage of weak partners, while the target is profit.

Ahead of the Eurogroup talks, everyone – from the politicians concerned to retired academics, from the remote think tank to a journalist apprentice, everyone who felt like saying something or even coughing in front of a microphone did it. And… surprise! I didn’t want to hear it 🙂

We, Greeks, have been through to similar situations and fell much too often victims of the Greek crisis war of words and threats since November 2009, half a year before the country was “rescued” by the Troika’s bailout. Every once in a while we have been exposed to unbelievable and incredible scare mongering tactics by our politicians, by foreign politicians, by national and international media.

I tell you one thing: That’s enough!

Even Greek PM Alexis Tsipras was rather appealing rather to the sentiment of MPs and citizens in Greece but also taxpayers in EU and eurozone countries, when he addressed the Parliament seeking a vote of confidence.

-Our proposal seeks to end austerity & make our debt sustainable. We need time to do so–and this is what we’re asking for from our partners.

-We need to negotiate the crucial issue of the debt & debt repayment procedures to help our economy return to growth.

-We do not wish to burden European taxpayers in perpetuity w/new loans to #Greece. We’re seeking logical solutions.

– An agreement that is in the mutual interest of #Greece and its lenders, that will end punitive conditions & destruction of the Greek economy

– An agreement w/partners for financial support, for #Greece to be able to fulfill its debt obligations.

The SYRIZA-Independent Greeks coalition government program was approved with 162 votes, that is as many seats the coalition has in Parliament. all opposition parties, 137 seats, voted “No”.

This Wednesday rally call via social media Facebook and Twitter runs under the slogan “Breath of Dignity” (Ανάσα Αξιοπρέπειας). All rallies start at 6:00 pm and austerity opponents are expected to flock despite the snowfall and the freezing temperatures. 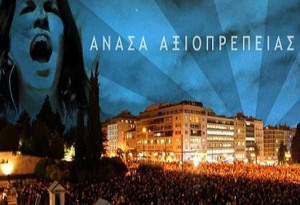 In Athens, the rally will take place Syntagma Square outside the Greek Parliament.