Germany rejects WWII Reparations, but Greece has a €162-billion argument

Foreign Minister Nikos Kotzias took the Greek claim of  World War II Reparation from Germany in his jacket pocket when he visited Berlin for talks with his counterpart Frank-Walter Steinmeier on Tuesday.

“In my inside pocket, I’ve got that part of the speech from the prime minister who addressed the issue (of reparations),” Kotzias said putting one hand into his jacket, during a joint press conference with Steinmaier.

“We are firmly convinced that all reparations issues, including forced loans, are judicially settled once-and-for-all,” Steinmaier replied after having said that Berlin was fully aware of its political and moral responsibility for the “terrible events” in Greece between 1941 and 1944 when Nazi German troops occupied Greece.

A day earlier German Vice-Chancellor Sigmar Gabriel had said that all matters in that regard had been finally dealt with in major power negotiations that led to German reunification in 1990.

The Greek claim of WWII Reparations was revived anew when Prime Minister Alexis Tsipras concluded his speech announcing the coalition government program saying that “the claim of the Occupation Loan and Reparation payments is a historic responsibility.”

In fact the issue was raised by Athens in April 2013, when Finance Ministry committee assigned to investigate the matter got together the total amount of 162 billion euro in outstanding World War II debts Germany ought to pay back to Greece.

The FinMin investigation lasted two and a half months, 109 archive files were examined.

80-pages Findings
93% of the cases refers to reparations for damages during WWI – when Greece was neutral
91% refers to hostage taking and deaths during WWII
90% in total refers to individual cases
Law 4781/1961: agreement between Greece and Germany on the compensation of individuals who suffered damages from the Nazis.
Finding: Only 50%, i.e. 115 million Deutsche Mark – of the reparations claims was given. The rest 100 million DM was never handed out.

Quite insane is the Nazis logic, according to which Greece was enforced to lend money to the occupation forces so that the latter keep on the occupy of the country and the continuation of the war.

Greek ‘enforced loan’ to the Nazis

According to Bank of Greece, Athens was forced to lend money to German occupation forces

According to the “loan” agreements of March and December 1942 these amounts should be returned to Greece after the end of the war. The loans were never paid back by Germany.

Right after the war, Bank of Greece estimated that the total amount was equivalent to 4.5 million golden British Pound.

When the issue was raised in 2013, Berlin rejected the claim with FinMin Wolfgang Schaeuble saying”that was settled long time ago” and the German Foreign Ministry arguing that “The federal government assumes that after several decades, the question of reparations has lost its relevance.”

Berlin first claimed that all compensation claims were satisfied with the agreement of 1961. However, this seems to have been only a part of the truth:

According to the Greek research findings

“the 1961-agreement referred and settled only claims raised by individuals” and further more “the compensation was never paid out in full.”

Recently, Berlin added in its argumentation list also the 2+4 agreement of 1990, after the reunification of West and East Germany. Here, Greece argues that the countries signed the “Charter of Paris” just “took notice of the agreement,” aiming to invite post-communist era countries to join Europe.

Whether it was a Greek Foreign Minister or the Greek President talking to Germans about the WWII Reparations, the claim was always rejected and thus with the fantastic advice to “forget the WWII reparations and look towards a United Europe.”

Populist German newspaper BILD falsely claimed today, Wednesday,  that the Greek claim to “enforced loan” refers to a payment of just €11 billion. However, the newspaper brings an excerpt from the 1961-agreement, confirming the Greek argument that the payment was just to compensate individual victims of the Nazi regime. 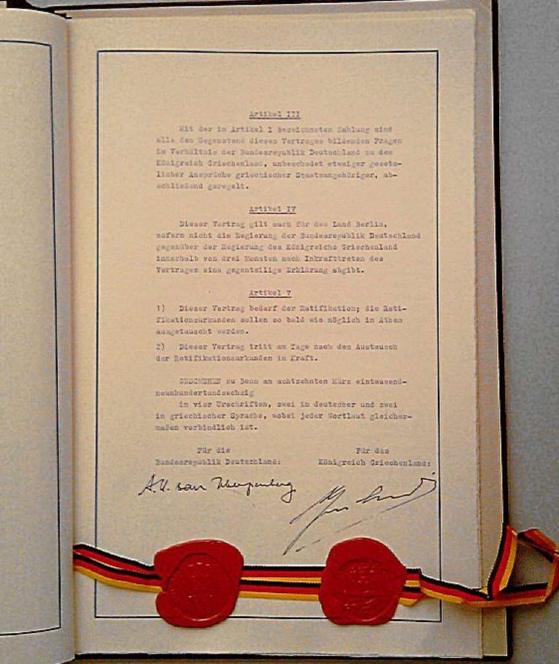 BILD.de Reparations Agreement: The Adenauer government paid 115 million Mark to Greece, in order to compensate Nazi victims and their descendants.

Veteran politician, WWII resistance fighter and promoter of the Greek claim, MEP Manolis Glezos, 93, asked a special debate in the European Parliament for the German Reparations. EP president, Martin Schulz rejected the request saying “40 MEPs’ signatures have to be collected or the leaders of Left-wing parties have to agree” before such a debate finds place in the EP.

We will never accept #Greek gov claiming reparations from another EU member state.This is against the very foundation of the European Union

@adiasistos @keeptalkingGR @GuyVerhofstadt What is against the EU foundations is what has been done to Greece and its people!

Charter of Paris for New Europe