Breaking News
Home / News / Politics / Poll: SYRIZA skyrockets to 45.4% and increases to 25% its difference to ND

Poll: SYRIZA skyrockets to 45.4% and increases to 25% its difference to ND

The party of Prime Minister Alexis Tsipras, left-wing SYRIZA takes a huge lead towards main opposition Nea Dimokratia of former PM Antonis Samaras. In a poll conducted twenty days after the January 25th elections by MARC for private Alpha TV, SYRIZA not only increased its elections rates of 37% to 45.4%, it also increased its difference to ND up to 25%. Furthermore the overwhelming majority of the poll respondents support SYRIZA in its negotiations with the eurozone and the EU partners. 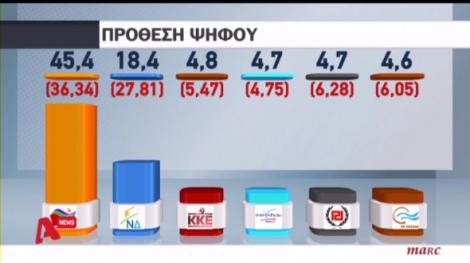 In red brackets are the Jan 25th elections results 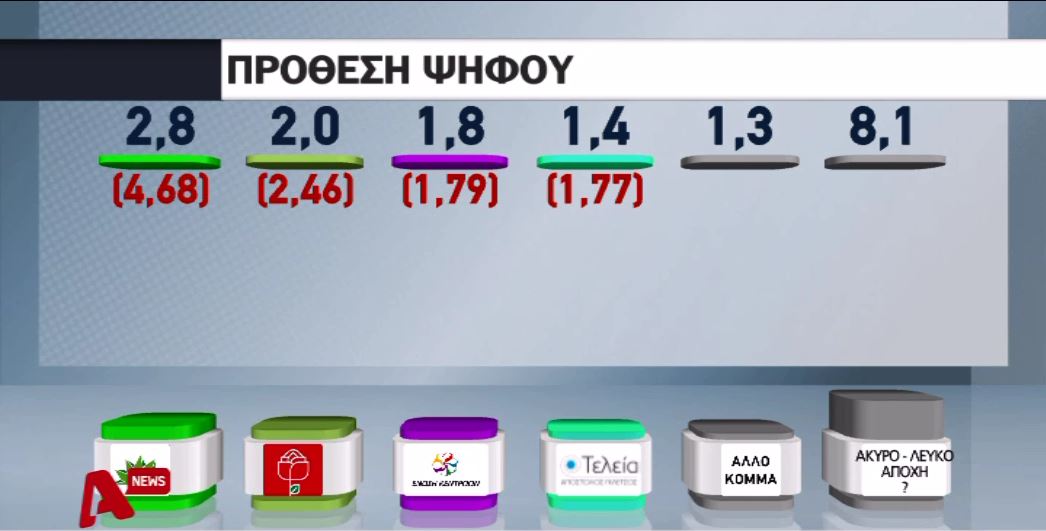 81.3% considers as “positive” and “rather positive” the first days of the new coalition government

82% judges as “positive” and “rather positive” Yanis Varoufakis as FinMin and main negotiator in the Greek debt issue.

The poll was conducted after important developments like “the announcement of government program” (Feb 8), the Eurogroup meeting (Feb 11) and the EU Leaders Summit (Feb 12).

Nea Dimokratia is inevitably collapsing, with ex PM Samaras to refuse to change his policy strategy or at least leave the party chairmanship.

The party that won the 3rd position in elections, Golden Dawn, is losing voters probably due to absence of MPs in the media and a number of voters probably cast a protest vote.

To Potami is losing its voters, despite the fact that the party would love to be a government coalition party. However, voters run away most probably because the party is still unable to formulate a clear policy.

PASOK obviously suffers from the upcoming change of  leadership that is due in a congress scheduled for …. May.

Should SYRIZA manage to successfully proceed into bailout program modifications, limit austerity and apply welfare to vulnerable groups of the society, be sure that it will sweep away all the other parties.

The full poll in Greek here.

PS at the very end, PM Tsipras was right to claim towards the eurogroup and the EU-partners that he has the support of the people in what he is doing.