Moscovici’s draft I & II to Varoufakis uploaded on internet

The draft handed out by EU Monetary affairs Commissioner to Greek Finance Minister Yanis Varoufakis prior to the Eurogroup meeting has been leaked to the press. In his press conference, Varoufakis said that he would have signed it. But Dijsselbloem had later given him another draft and he described as “unacceptable”. 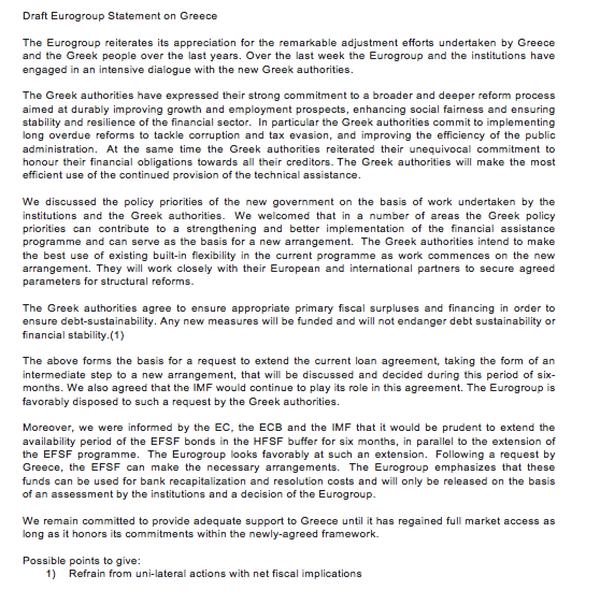 The draft was uploaded by @PaulMason of Channel 4 in Scribd .

The Eurogroup reiterates its appreciation for the remarkable adjustment efforts undertaken by Greece and the Greek people over the last years. Over the last week the Eurogroup and the institutions have engaged in an intensive dialogue with the new Greek authorities.

We discussed the policy priorities of the new government on the basis of work undertaken by the institutions and the Greek authorities. We welcomed that in a number of areas the Greek policy priorities can contribute to a strengthening and better implementation of the financial assistance programme and can serve as the basis for a new arrangement. The Greek authorities intend to make the best use of existing built-in flexibility in the current programme as work commences on the new arrangement. They will work closely with their European and international partners to secure agreed parameters for structural reforms.

The Greek authorities agree to ensure appropriate primary fiscal surpluses and financing in order to ensure debt-sustainability. Any new measures will be funded and will not endanger debt sustainability or financial stability.(1)

The above forms the basis for a request to extend the current loan agreement, taking the form of an intermediate step to a new arrangement, that will be discussed and decided during this period of six-months. We also agreed that the IMF would continue to play its role in this agreement. The Eurogroup is favorably disposed to such a request by the Greek authorities.

Moreover, we were informed by the EC, the ECB and the IMF that it would be prudent to extend the availability period of the EFSF bonds in the HFSF buffer for six months, in parallel to the extension of the EFSF programme. The Eurogroup looks favorably at such an extension. Following a request by Greece, the EFSF can make the necessary arrangements. The Eurogroup emphasizes that these funds can be used for bank recapitalization and resolution costs and will only be released on the basis of an assessment by the institutions and a decision of the Eurogroup.

We remain committed to provide adequate support to Greece until it has regained full market access as long as it honors its commitments within the newly-agreed framework.

Possible points to give:
1) Refrain from uni-lateral actions with net fiscal implications.”

Kudos also to @NChatzinikolaou for mentioning the upload on his live TV program.

I suppose everyone will be looking for page -2- now…

The Moscovici’s draft has nothing in common with Dijsselbloem’s draft that was rejected by Athens.

Short time later, Paul Mason twitted that there was a second draft by Moscovici, an improved version!

It seems that Moscovici had a whole book of drafts!!! Below see the final draft as uploaded by Paul Mason:

(3/4) The “close of play version” of @pierremoscovici is here: pic.twitter.com/szjyFcPoW4

“So this “close of play draft” is even stronger pro-the Greek position than my earlier one,” Mason notes, adding “For transparency: i was sent 18:40 version by trusted source to show it existed, but this [2nd draft] one superseded it.”