Nobody can claim, he has a dull moment in Greek politics. Hardly had Prime Minister Alexis Tsipras nominate the Presidential candidate on Tuesday afternoon, one of the opposition parties, To Potami announced its own favorite. In a parliament that did not manage to elect the President in December and took the country to snap elections, suddenly there are two candidates standing there: Government’s choice,  Prokopis Pavlopoulos, and Potami’s choice: Nikos Alivizatos. Both candidates are professors of Constitutional Law.

The first voting round is scheduled to start at 7 pm Wednesday, February 18th 2015.

According to Constitution, the Presidential candidate will need 180 votes to be elected in this first round.

Candidate Pavlopoulos is expected to win the Presidential election tomorrow, with at least 238 votes coming from the coalition government SYRIZA-Independent Greeks (162 seats) and Nea Dimokratia (76 seats).

Candidate Alivizatos has good chances to get 17 votes from To Potami and an option for 13 more votes, should PASOK decide to support Potami’s choice.

Stressing the importance of unity at the society and political level, Prime Minister Alexis Tsipras said that:

“We need a personality with democratic sensitive, a strong sense of national consciousness and a wider acceptance in society and in the parliament,” adding “With this in mind and  in consultation with the party Independent Greeks I nominate Prokopis Pavlopoulos.” 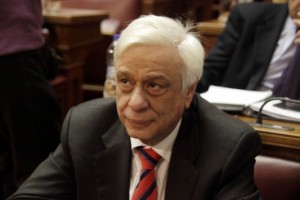 Under Kostas Karamanlis government, he served as Minister for the Interior, Public Administration and Decentralization (2004- 2007) and Minister for Interior and Public Order (2007-2009).

He was active in politics for 17 years, he announced that he withdraws in December 2014.

From the very beginning PM Tsipras wanted a politician from the conservative right-wing as the next President of the Hellenic Republic, as a good will gesture towards the society and the parliament.

His first choice was EU Commissioner for Migration, Dimitris Avramopoulos. But he failed due to the strong objections from the Left Platform, one of the SYRIZA components.

Some wonder already what’s the difference between Samaras’ candidate Dimas and Tsipras’ candidate Pavlopoulos as they are both from Nea Dimokratia. The difference is simple: Samaras had picked up a person form his own party, the President would have a clear party profile. But Left-wing Tsipras chose somebody from the party of his main political opponents.

Tsipras’ coalition partner Panos Kammenos stated that he will vote for a candidate who is against the loan agreements.

In the recent past, Pavlopoulos had had declared that dismissals of public servants were against the Constitution.

I told you: Greeks can be very mean and skeptical…