Greece’s mission impossible: Bailout demands Primary Surplus that not even Germany can achieve

“The Greek negotiators who went to Brussels in mid-February to argue for more lenient terms from their lenders were especially concerned about one thing in any new deal: the target for achieving and keeping a primary surplus. A measure of austerity, it’s what a government earns in taxes each year, minus what it spends on everything except interest payments on its own debt. It’s usually expressed as a share of gross domestic product.

Under its four-year-old bailout program, Greece has dragged itself from a primary deficit of 10 percent to a 3 percent surplus, at great cost in jobs lost. The terms of the bailout demand that Greece reach a surplus of 4.5 percent and hold it for the length of the program. There’s little reason to believe that’s possible.

Since 1995 all the countries of the euro area reached an aggregate primary surplus of 3.6 percent only once, in 2000. That number is back below zero. (Even Germany, the Federal Republic of Austerity, reached its own peak of 3 percent only twice, in the last quarter of 2007 and the first of 2008.) In 2011 the Kiel Institute for the World Economy looked at the records of all Organisation for Economic Co-operation and Development countries from 1980 to 2010. It found that few countries could maintain a 3 percent surplus and almost none could keep a surplus above 5 percent. This suggested a limit to what countries can do, the report concluded. They could cross those thresholds briefly, but “over years and decades, this goal is almost entirely illusory.”

Last year, Barry Eichengreen of the University of California at Berkeley and Ugo Panizza of the Graduate Institute in Geneva found that from 1974 to 2013, only three countries ran primary surpluses of 5 percent or more for a decade: Singapore, Norway and Belgium in the 1990s.

Last year, then PM Samaras’ coalition government cheered to have achieved a primary surplus of €1.9 billion. No bad, but Greece was €3 billion below the target. The PS was achieved by performing strictest austerity in expenditure totaling one billion euro.

According to Nea Dimokratia MEP Giorgos Kyrtsos,  “There was no primary surplus anyway. It was achieved by delaying payments, doing this and that.” He did not elaborate. 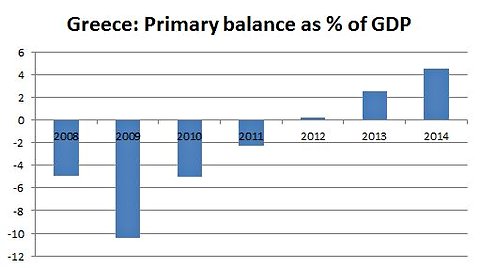 via Paul Krugman blog in NYT

Mission impossible for a country in deep recession!