These Turks are crazy! They issue NOTAM to use a.o. Limnos island as “Firing Exercise Area”

March 2, 2015 Turkey-GR Comments Off on These Turks are crazy! They issue NOTAM to use a.o. Limnos island as “Firing Exercise Area” 276 Views

A diplomatic ‘war’ broke out between Greece and Turkey, after Ankara issued a NOTAM to “reserve” a large part of the Greek airspace over the Aegean Sea for military exercises and use international air space, Greek FIR and the south part of the island of Limnos as “Firing Exercise Areas” with real ammunition.” 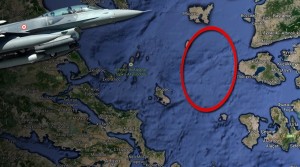 The Turkish move has been considered by Greece as unprecedented provocation and Athens protested not only to Ankara but also to NATO and the International Civil Aviation Authority (ICAO).  Greece’s civil aviation authority issued a navigational warning stating the Turkish NOTAM was null and void.

According to the NOTAM issued on February 27th 2015, Turkish military reserves half of the Agean Sea and the area between the islands of Skyros (Sporades) and Limnos (Dodecannese) until December 31st 2015 for military use and warned non-military aircraft to refrain form flying in these areas.

Greek Foreign Ministry spokesman Constantinos Koutras said that Turkey has unilaterally issued a Notice to Airmen, or NOTAM, reserving an extensive airspace over the Aegean Sea from March 2 to December 31, 2015, for military use.

Koutras said that Greece would take the matter to NATO, the United Nations, the European Union and the International Civil Aviation Authority (ICAO).

After the strong Greek protest, Turkey reportedly issued a new NOTAM on Monday, excluding the Agia Irine Cap on the island of Limnos.

When Greece protested also the revised NOTAM, Turkey issued an additional one, withdrawing its plans to turn a large part of the Aegean Sea into a permanent “Firing Exercise Area”,

According to Greek media, Turkey wants to take advantage of the economic issues of the country and created a de facto situation and a new status quo of questioning Greek sovereignty by using Greek air space, sea waters and even land for its military exercises.

PS Exactly what we have been missing in our Greek troubled life is “Turkish fighter jets dropping bombs in our soil’ in the name of ‘military exercise’. There is still something wrong in the state of mind of the Turkish Generals and President Erdogan, I”m afraid…