Golden Dawn MP Ilias Kasidiaris was cleared of charges for having slapped Communist MP Liana Kanelli during a live TV show back in 2012. A despicable act of violence that took place in front of the eyes of thousands of viewers.

So how comes that the beater was acquitted of charges?

Apparently due to some “juristic details”:

4) The prosecutor said that Kasidiaris “could be found guilty of simple bodily injury, but that needed a law suit to be filed by the victim within three months.

Liana Kanelli told the court that she did not want to file a law suit against him as “the action by itself was humiliating.”

She told Realnews.gr, that her decision not to file a law suit was “political”.

An Athens court ruled that the assault was not as severe as described in the charges.

Moreover, judges did not convict Kasidiaris of plain assault because that would have required a lawsuit by the victim, which was never filed.

During the tense procedure, Kanelli was targeted for abuse by supporters of Kasidiaris who turned up at the court.

In his defense Kasidiaris, currently in pretrial custody together with other Golden Dawn MPs over charges of running a criminal organization, described the attack as an “unfortunate moment,” adding however that he had only slapped – but not punched – Kanelli. (via ekathimerini)

Greek Communist Party KKE issued a statement describing as “provocative” the court decision “despite the fact that it had accepted the charges of simple bodily injury.” The KKE statement underlines that the court decision “contributes to a climate of tolerance towards to the criminal action of the Golden Dawn.” 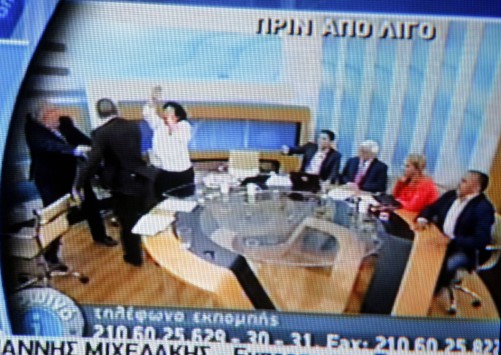