The front page of Sunday newspaper Real news sent shock waves across the country and most of all to Greek political world. Citing a document issued by then Anti-Corruption prosecutor, the Real News said that former finance Minister Gkikas Hardouvelis was been investigated for having transferred money abroad in the time around the elections of 2012. The investigation aims at bringing into light whether this money was taxed or not and why it was not declared in his “where from” declarations as he was a public person. 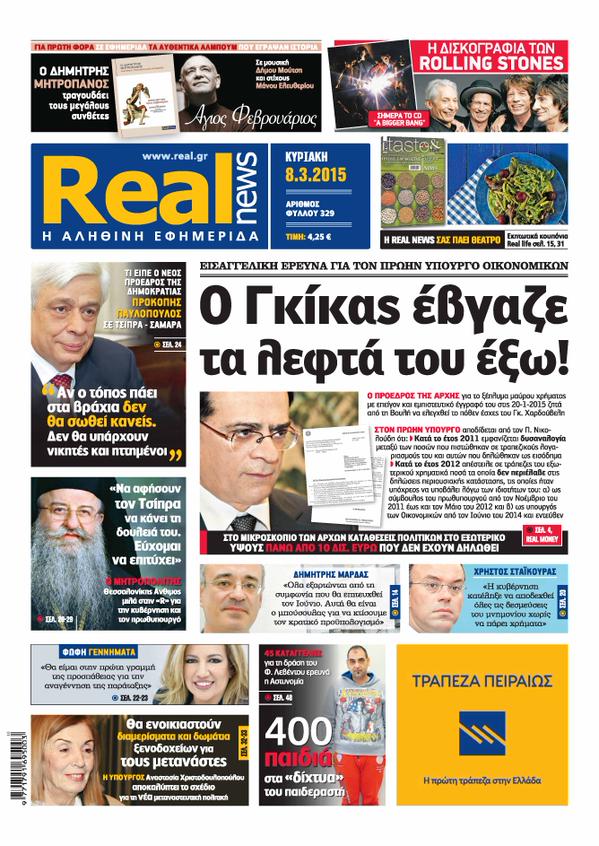 According to the document dated 20. January 2015  – that is 5 days before the elections – Gkikas Hardouvelis had transferred funds abroad from his personal banking accounts and that the transferred money was not included in the statements that he had been obliged to submit as adviser to PM Lucas Papadimos (November 2011- May 2012) and as finance minister since June 2014.

Also according to the document there was discrepancy between Hardouvelis’ tax declarations in 2012 and the amount that was transferred.

Gkikas Hardouvelis responded to the Real News that spread like a wild fire and said in a statement that:

“The amount belonged to him and his wife and that they had been taxed. the money in the bank accounts abroad was income earned from working for years in the United States when he was not in public office and he was not required to include the money into the assets certificate every public official has to submit. His bank deposits were included in the income declaration he files with IRS (in the USA).”

The report triggered an exchange of statements between SYRIZA and Nea Dimokratia. The government party spoke of  transferring money abroad by “a man who together with Samaras were urging Greeks for more sacrifices.”

Nea Dimokratia let it up to Hardouvelis to give the necessary explanation and urged SYRIZA “to display the same sensitivity towards three of SYRIZA minister who have money abroad.”

Meanwhile, according to another newspaper, Parapolitika, 38 former prime ministers, party leaders, current and former ministers and lawmakers had money in banks abroad. However, this list is based on what public persons and officials had already declared and was made public.