A experts’ evaluation from thee Scientific Service of the German Parliament (Bundestag) confirmed Greece’s WWII reparation claim at least on the “enforced loan” part of the claim. On the basis of the International Law that sets the rules generally regarded and accepted as binding in relations between states and nations, the report analyzes the “enforced loan” conditions and possible time limitations for the Greek claim.

It comes to the conclusion that Greece had any right to claim the repayment of the enforced loan in 1990 when the Reunification of Germany was sealed with the Two-Plus-Four Treaty of Paris. And that this right has not been abolished neither that it was a subject to “time limitation”, as the German government insists.

Furthermore, the report examines the legal options for Greece in international, Greek or German courts.

Still in 2013, the year when the report of the Scientific Service of the German parliament was issued, Greece had chances to claim if not the whole pack of World War II reparations from Germany, certainly repayment of the loan it was enforced to give to German occupation forces in 1942 and ‘finance’ the occupation of Greece.

KTG has access to the report of the Scientific Service of the German Parliament and here are the main points:

KTG has access to the report of the Scientific Service of the German Parliament and here are the main points: 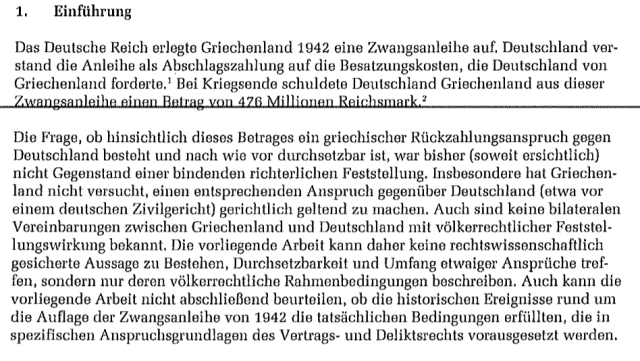 “In 1942, the German Reich enforced Greece to lent money in order to pay for the occupation cost. At the end of the war, Germany owed Greece 476 million Reichsmark.”

The report states among others that:

“The question on whether a Greek repayment claim towards Germany exists has not been cleared through a “binding judge decision”, especially because Greece has not legally claimed the repayment, for example in a civil court in Germany.

Furthermore the report notes that there have been “no bilateral agreements between Greece and Germany on the issue based on international law.”

The report stresses that its findings are “not legally specified findings” but a “description of the frame conditions of the claim based on International Law“.

After a long explanation of the legality or illegality of the German enforced loan from Greece (based on the Haager Landwar Law of 1907), the report comes to the question of whether “time limitation” exists for the Greek claim.

Here we should not that the German government claims that Greek WWII reparations have been forfeit through payments in 1960 and that after the 1990 Treaty of Paris, the Greek claims have been object to “time limitations.” 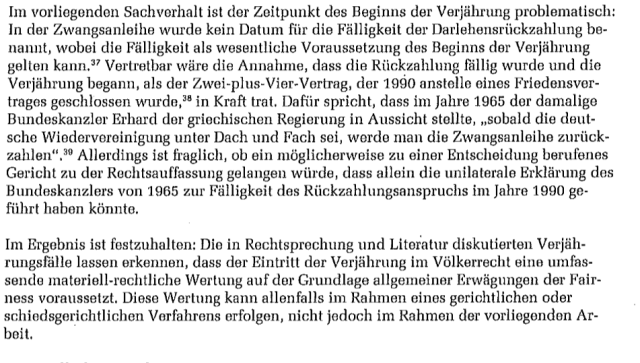 “The begin of time limitation is problematic because the enforced loan agreement did not was set the time for the repayment,” notes the report stressing that “when the Two-Plus-Four Treaty of 1990 came into force instead of a Peace Treaty” Greece could have claimed the repayment.

Then, “In the year 1965, German President Erhard held out to Greeks the perspective that “as soon as the reunification happens, the enforced loan will be paid back.” However it is questionable whether a judge [in case Greece could claim the repayment in courts] “would accept the unilateral statement of then German Chancellor Erhard.”

“That Greece has not claimed so far the repayment could lead Germany to claim that Greece gave its silent consent or implied consent.”

However such an assumption cannot be “scientifically confirmed” as several legal concepts are not specified according to International Law.

The report concludes with the several legal options for Greece to claim the repayment in the International Court of the Hague, in Greek national courts or in German civilian courts. With the last being apparently the most appropriate option.

According to a report of Frontal 21-Magazine broadcast on 3. March 2015 by German state television network ZDF, Germany achieved the postponement of a payment in reparations and compensation to Greece worth billions in 1953.

Lawyer Anestis Nessou told Frontal 21-Magazine the “enforced loan” was ” 786million Reichsmarks in October 1944, “some 3.5 billion euro”. Nessou’s data is based on Nazi-occupators’ document at the German Foreign Ministry.

The German Government will continue to reject the Greek reparation claim in order to avoid a “precedent”, Nessou told ZFD. “If Greeks would be compensated, then other countries could make claims against Germany.”

Frontal 21 proved that Greece has never really abolished its right to claim the WWII reparations neither gave silent consent after 1990 Reunification Treaty. The TV-magazine cites a verbal note from November 1995.

Professor for International Law  Andreas Fischer-Lescano criticized the German government for using “cynical tricks and tactics” in a way that is “degrading for a state of law”.

PS I wonder what the German Bundestag says to the report  issued by the Scientific Service.