It was short after 3 in the morning Friday, when Greek Prime Minister Alexis Tsipras, German Chancellor Angela Merkel, French president Francois Hollande and the other kids of the creditors’ block left the chairs of the Mini EU Summit round table on Greek debt. After talks that lasted four and a half hours, Tsipras had managed to explain to creditors the Greek approach to 20. February Eurogroup decision and to persuade them to give … time. A whole week.

By next Friday, March 27th, Greece will have to have submitted to the Eurogroup a complete list of reforms. Then, Greece might have a chance to receive some EU funds to implement the measures to tackle the humanitarian crisis and thus by end of March.

After the meeting PM Alexis Tsipras declared to be “more optimistic” and said:

“It is clear that Greece is not obliged to implement recessionary measures,” the 40-year-old Greek premier told reporters, referring to previously agreed reforms. “Greece will submit its own structural reforms, which it will implement.”

German Chancellor Angela Merkel described the meeting as “good and constructive,” but warned that the Greek government will have to meet commitments before it can access EU money.

With the “new deal” the Greek government believes that the “Grexit” threats are now off the agenda, of any agenda, off any scenario. 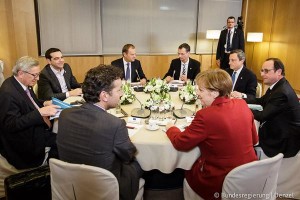 We may experience a couple of quiet days, until national and international media and all kinds of parrots start digging on Greece again before next Friday. Not to mention what will happen when Greece submits its reforms list and an extraordinary Eurogroup will be due again.