Greek prime Minister Alexis Tsipras warned German Chancellor Angela Merkel, French President Francois Hollande and European Commission President Jean-Claude Juncker of the dramatic situation of Greece’s finances. In a 5-page letter Greek PM expressed his “deep concern” about the impact of the Eurogroup agreement of February 20th to the country’s funding and warned that without funding, the payment of debt obligations would be ‘impossible’.

The letter was written on March 15th 2015 , that is four days before the Mini EU Leaders Summit.  PM Tsipras wrote among others: 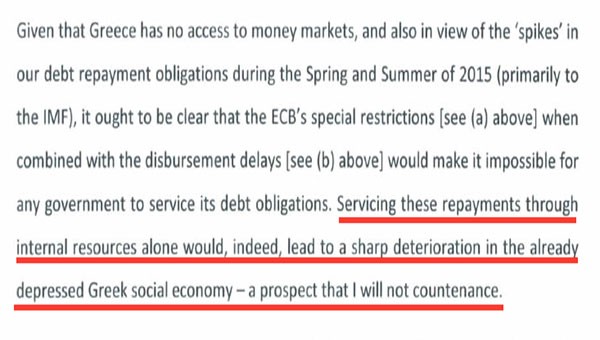 The letter was revealed by Financial Times on Monday, the day that Alexis Tsipras is paying an official visit to Germany to meet and talk political solution to the debt problem with Angela Merkel.

You can read the whole letter here.

The last bailout reimbursement of €7.5 billion remained outstanding when the previous government did not agree with the Troika on further austerity measures and the fifth progress review of the bailout program did not conclude in December/ January as foreseen by the bailout agreement.

On the other hand one should note, that 80% of bailout reimbursements go back to the lenders and only a small tranche goes to the Greek government.