Greek Defense Minister: We cannot keep ISIS out if EU keeps bullying us

For a second time within a couple of weeks, Greek Defense Minister and leader of coalition government junior partner Independent Greeks, Panos Kammenos warned that if the European Union keeps undermining the coalition government and the country exit or is forced to exit the Euro “waves of migrants: will stream from Turkey to Europe and among them there would be ISIS “radicals.”

Speaking to THE TIMES, Kammenos said:

“The gross meddling into [Greek] domestic affairs isn’t just unheard for European standards, it’s unethical and it’s dangerous. If Greece goes, then a lot more than financial stability and the euro is at stake.”

“If Greece is expelled or forced out of the eurozone, waves of immigrants without papers, including radical elements, will stream from Turkey and head towards the heart of the West,” Kammenos told The Times. 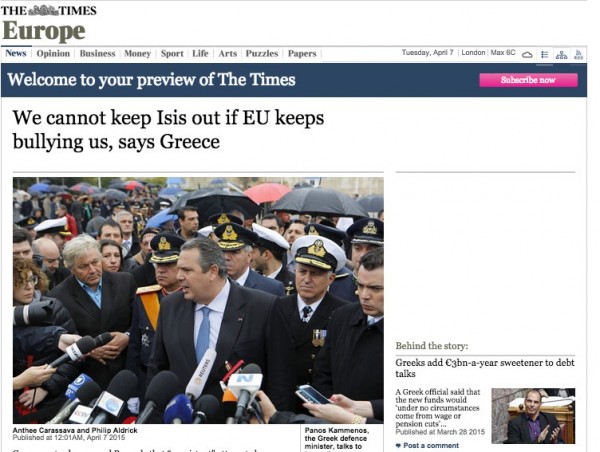 German government coalition partners, the European Parliament President Martin Schulz and “European anonymous sources” have repeatedly and even blatantly expressed the wish that Prime Minister Alexis Tsipras gets rid of nationalist Kammenos and make a coalition with austerity-friendly To Potami and/or even PASOK.

Panos Kammenos described these statements and efforts as “bullying” committed by Brussels and Berlin in order to force Greece into “a full and complete economic surrender.”

“Europe must realize that maintaining Greece stable, the West front against the Islamic State (ISIS) is safe. But if expelled or forced out of the eurozone, waves of immigrants without papers, including radical elements will stream from Turkey, heading towards the heart of the West. If these waves of immigrants increase, then the threat of incoming extremist elements will grow not for Greece but for the whole of the West. “ (The Times via Newsit.gr)

It is not the first time, Kammenos makes similar warnings. Short before another “crucial” Eurogroup meeting, beginning of March, he warned Berlin to “flood Europe with migrants”, potentially including Syrian jihadists, if Europe fails to find a solution to the Greek debt crisis.

“If Europe leaves us in the crisis, we will flood it with migrants, and even worse for Berlin if in that wave of millions of economic migrants there will be some jihadis of the Islamic State too,” according to the Italian newspaper La Repubblica.

He went on explaining that: “If they [the Eurogroup] strike us, we will strike them. We will give to migrants from everywhere the documents they need to travel in the Schengen area, so that the human wave could go straight to Berlin.” (via Business Insider)