Breaking News
Home / News / Economy / Business and claims as usual: “Greece is defaulting” each and every day

Business and claims as usual: “Greece is defaulting” each and every day

April 14, 2015 Economy Comments Off on Business and claims as usual: “Greece is defaulting” each and every day 78 Views

Over the Easter days, Greece was exposed to a barrage of negative media reports claiming that a “Greek default” was “imminent” if the bailout talks between the Greek government and the creditors fail. The claims continued also today with the aim to increase pressure ahead of the Euro Group meeting scheduled for April 24th 2015. The usual “suspects” named and unnamed EU and IMF officials, Funding officials, even alleged Greek ministers warned of a default and about little or no progress in the talks.

EFSF head Klaus Regling, for example,  claimed towards Portuguese newspaper Diario de Noticias, that “the Greek government has not yet submitted a coherent list of reform proposals” and that “the European partners want a detailed, comprehensive list of reforms, which will allow Greece to return to a sustainable situation, before dispensing any further aid.”

EU Commissioner for Monetary issues Pierre Moscovici told the monetary and economic affairs committee of the European Parliament that the Institutions – formerly known as the Troika – “are awaiting for the full list of reforms.”

The European Commission signaled that it awaits specific Greek proposals by April 24th.

Disappointed with Greece is apparently also Poul Thomsen, the IMF’s Europe director, who allegedly told the Fund’s executive board that negotiations were “not working” and he could not envisage a successful conclusion to the country’s current bail-out.

And it is not only the creditors who are concerned. An alleged Greek minister felt obliged to let the Financial Times look deep in his wounded soul and empty pockets. Under the protection of his anonymity, the Greek official told FT:

“We have come to the end of the road . . . If the Europeans won’t release bail-out cash, there is no alternative [to a default].”

Oh, another Greek Minister is claimed to have said that the Greek government was preparing for snap polls.

An article by the Financial Time on Tuesday spread like wild fire. The article claimed that

“Greece was preparing for a debt default if it did not reach a deal with its creditors by the end of the month.

Citing people familiar with the matter, the Financial Times reported that Athens may withhold payments to the tune of 2.5 billion euros ($2.64 billion) to the IMF due in May and June, if no agreement is struck.”

According to Financial Times, Athens escaped default in February, March and April but it will default in May;  and if not May… certainly in June.

The Greek government denied reports on preparing both default and snap elections.

“Greece … is not preparing for any debt default and the same goes for its lenders. Negotiations are proceeding swiftly towards a mutually beneficial solution,” Prime Minister Tsipras’ office said in a statement, Reuters reported.

Minister for Productive Reconstruction, Panagiotis Lafazanis said in an interview to Parapolitika FM that “a non-agreement with creditors on April 24th is not the end for Greece” and that “the country had alternative solutions.”

As expected, Lafazanis did not elaborate on details of these “alternative solutions”.

As the next Euro group meeting is nearing be assured to read more articles as international mainstream media keep on hacking and digging on Greece as the new Greek government has not managed to establish a strong international lobby. Unfortunately.

Nevertheless, things become really ridiculous, with some international media advising Tsipras how he has to govern to avoid a… default. Yep! It’s main campaigner of Greek Default, the financial times. 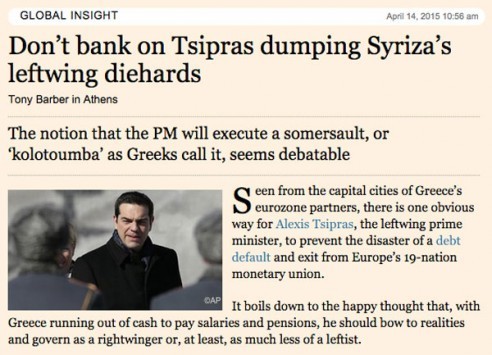 Anyway, this default scenario each and every month reminds me of a old Greek drama film “I die every dawn”.

Grexit here, default there, the film was very dramatic indeed…