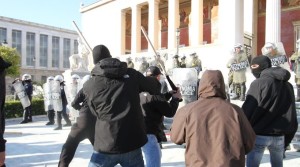 When the protesters moved against the police with wooden sticks and stones, the tolerance of the left-wing government towards “freedom of expression and protest” was over. 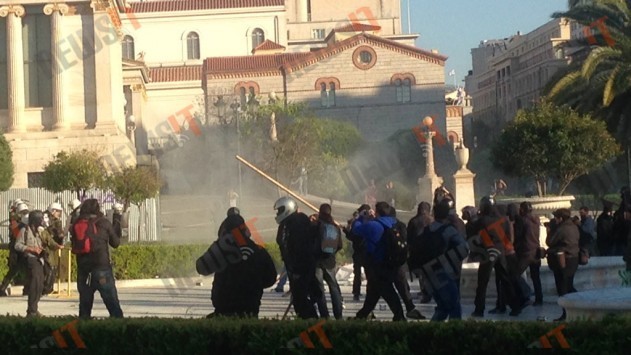 Police fired tear gas and flash-bang grenades and started to chase the protesters.

Media and eye-witness report of ongoing tension in the area and two main avenues – Stadiou and Panepistimiou- to be currently closed to traffic.

There is some confusion about the aim of the number of protesters. According to some media, a group of 150 people tried initially to break the police cordon, other media claim that the crowd grew to 1,000 after citizens joined the anti-authoritarians. Some speak of “anarchists”.

According to unconfirmed reports, the “protesters” attacked with fists and kicks a photo-journalist intern who was trying to shoot some pictures.

There has been much criticism against the government and the Alternate Minister for Public Order Yiannis Panousis for having tolerated not only the University occupation but also for allowing “trouble-makers” to run Athens into a battle field with damaged cars and fires on garbage bins.

Panousis said on Wednesday that “the occupation of the University would be soon over.”

We don’t know if Panousis has plans to end the occupation with the aid of police today, but he showed that he would no longer tolerate trouble-makers.