Huh!? We have a saying in Greek, I will reveal it to you at the end of the post… Dutch Finance Minister and Eurogroup head Jeroen Dijsselbloem warned the Greek government that Europe is prepared for any outcome to the standoff between Greece and its creditors.

Of course, Dijsselbloem did not pick up the phone and warned his Greek counterpart Yanis Varoufakis, Of course, not. It needs guts to do something like that. No, he said what he said at the Dutch Parliament. .

Asked by Dutch lawmakers whether there is a “plan B” in case Greece should be forced out of the euro zone or defaults on its debts, Dijsselbloem said:.

“(Is) the eurozone prepared for eventualities, the answer to that is: ‘yes’,” Reuters reports

Dutchman Dijsselbloem could not hide his satisfaction over  Varoufakis’ sidelining.. He said that he hoped that discussions with Greece would become more productive after Prime Minister Alexis Tsipras reshuffled his team of negotiators discussing a resumption of the country’s current bailout program, sidelining Finance Minister Yanis Varoufakis.

“Hopefully we were able to make a kind of new start this week,” Dijsselbloem said  adding “I say ‘hopefully’ because of course the result has yet to be seen.”

And then the incredible happened! The boy still in search of his Master degree dared to criticize the elected Prime Minister of a sovereign country. He criticized Alexis Tsipras and Finance Minister Yanis Varoufakis for …giving interviews !In his latest film “From modest agriculture accountant to shining Euro chief” Jeroesn Dijsselbloem said:

“I wish that less time would be given to interviews, and more on extraordinarily conscientiously working on keeping Greece from the threatening abyss.” 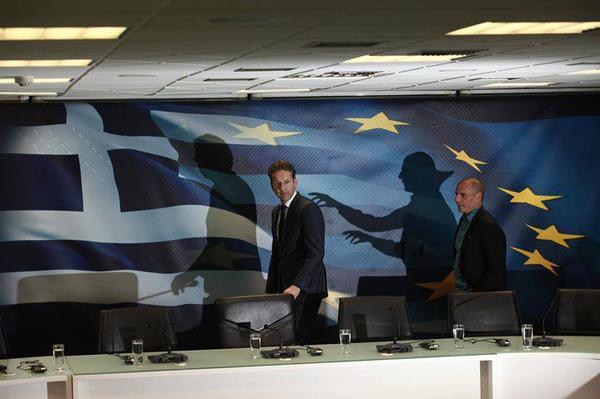 Varoufakis’ ghost will always haunt Dijsselbloem till the end of his days. Oh, and Schaeuble!