Greece averted default in May, now the treat is imminent again. Next Dommsday Doomsday is predicted to occur beginning of June when Greece will have to pay back  €1.5 billion to the IMF. However the country of “eternal blue and picturesque islands ” has run out of cash as it has been paying its obligations to the lenders and cover its own needs out of own resources since August 2014.  According to a IMF memo leaked to Paul Manson and UK’s Channel 4 News:

Greece and the creditors have just days to reach an agreement or a critical payment to the IMF on 5 June .

In the memo dated May 14th, the experts at the IMF state:

“There will be no possibility for the Greek authorities to repay the whole amount unless an agreement is reached with international partners.”

They point to the €1.5bn due to the IMF in June as the first vulnerable payment.

The IMF memo confirms that there has been “some recent progress” in negotiations between Greece and its lenders: on VAT reform, tax collection and regulations that would make it easier for Greek companies to go bust and be restructured.

But the tight timetable, and growing tension between the IMF and the Europeans, mean next week’s Euro summit in Riga looks like the last chance to do a deal before Greece technically defaults on a payment to the IMF in early June.

Furthermore, the IMF names as outstanding issues that prevent a deal: pension reforms, deregulation of the labor market and re-hiring of 4,000 laid-off civil servants. 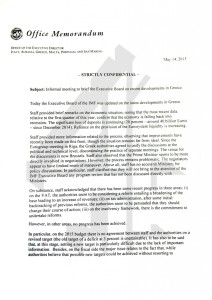 Full Memo here in Channel 4 Blog
In the 2-page long memo, the smart guys of the IMF realized among others that the “unreserved loans have reached a high level” and also finally noted with a 3-year delay “a dramatic deterioration in the payment culture in the country.”
I assume it has not come to the attention of the IMF yet that many households have default long time ago and whether the creditors agree or not with the Greek government on VAT hikes and revenues collection… we, the common Greeks, are broke.
PS KTG remains always at the disposal of the IMF to supply it with fresh news and data from the real Greek life and explanation as to why these damn’d reforms will never work whether with a further debt relief or additional bailout package, whether with Syriza in power, with Samaras & Co or Goofy.