Breaking News
Home / News / Economy / Schaeuble’s moment: Large part of Greek population is suffering but the Gov’t does nothing to end this suffering

Schaeuble’s moment: Large part of Greek population is suffering but the Gov’t does nothing to end this suffering

“We know that a large part of the Greek population is suffering but the Greek government doesn’t see yet what needs to be done to end this suffering.”

I don’t know, how further austerity including V.A.T. hikes, additional cuts in pensions and wages, retirement at 70+ and massive lay-offs will end people’s suffering but Germans have always knew better. 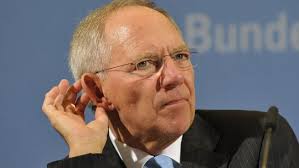 He also said that “negotiations were going too slow” and that despite “some progress in sub-areas, there has not yet been a breakthrough.”

Woflgrang Schaeuble said that discussions revolved around Greece’s fulfillment of the current aid program [call me: Wolfgang Nonstopausteritle] and there was no need to speculate about a “Plan B”.

Schaeuble’s quotations were transported to Reuters by three German conservative politicians who were present at the meeting of CDU’s parliamentary fraction with Schaeuble, where the conservative pals held a big debate about Greece and  “several lawmakers spoke about their trips to Greece and expressed concerns about the willingness to reform there.”