Hillarious! Greece’s Eurovision song had a secret message to creditors?

May 20, 2015 Very Mix Comments Off on Hillarious! Greece’s Eurovision song had a secret message to creditors? 119 Views

Things are not always as they seem to be. While millions of Europeans thought that the Greek Eurovision song was about a broken heart and desperate love with all essential emotions of betrayal, endless pain and struggle… Alas! The lyrics of  “One last Breath” sung by Maria Elena Kyriakou could most likely have a hidden message to Greece’s creditors and eurozone taxpayers.

“I’m begging you take me
out of this firing hell.
Come back and save me —
What happened wasn’t fair.
Nothing left. All that I have
is one last breath.
Only one last breath.”

In an article with title “The hidden cry for help in Greece’s Eurovision song“, Market Watch journalists investigate the lyrics and express the view that Kyriakou’s song had a clear political message.

Could the debt-saddled country be trying to smuggle an appeal to other Europeans via its Eurovision Song Contest entry?

Take a look at the clues. First, the song is called “One Last Breath” — somewhat appropriate for a country being squeezed by international creditors to meet their demands or lose bailout cash. Greece is seen as only a few weeks away from a debt default.

Second, Greece’s vocalist Maria Elena Kyriakou accuses an unnamed “you” (Germany, perhaps?) of betrayal and drunken lying, leaving the wounded party struggling for survival alone in the dark. Not far from how many Greeks feel about the bailout negotiations with eurozone lenders. (full article here)

To support the authors’ approach, I have to add this: 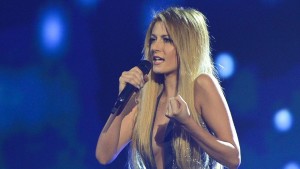 Maria Elena Kyriakou, 31, made a very clear point by appearing in a dress short of fabric and absence of buttons in sensitive positions. A symbolical demonstration to stress the hazardous impact of austerity? To show that wages and pensions cuts, high unemployment and extremely low or extremely delayed salaries deprive people from covering the basics?

It should be particularly stressed that Maria Elena Kyriakou’s participation, song lyrics, hidden and unhidden message and appearance in the Eurovision 2015 has in fact a triple symbolism: the girl is a Greek-Cypriot! That’s extremely important when one reckons the capital controls imposed on Cyprus, when the island state played with the lenders’ nerves.

Tomorrow in Riga we will find out whether the EU leaders indeed got Kyriakou’s message or whether they just shed a tear listening to the Greek love plight.

At the end of Eurovision semi finals Tuesday night, Maria Elena Kyriakou got a lots of votes and managed to be among those to join the Eurovision 2015 Grand Final next Saturday. That is: Two days after the Riga talks between Prime Minister Alexis Tsipras and German Chancellor Angela Merkel & Co.

PS I assume, in case the Riga talks fail, the Greek contestant might appear wrapped in a piece of worn-out cloth and barefoot…  Austerity Sucks! 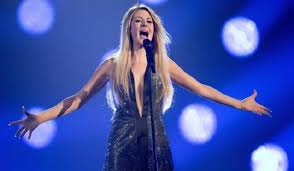