Greek government sent a 47-page long draft plan to the creditors on Monday. In the lost list of austerity reforms the government has among others: privatizations and early retirement,  debt restructuring and Primary Surplus 2015-2018, tax revenues, minimum wage and collective bargain. The signals from the country’s creditors were rather negative: not sufficient enough, they say.

German daily Der Tagespiel obtained the Greek government’s Economic Policy Reforms 7/2015- 31/3/2016 and Completion of the Current Program /Staff level Agreement, May 2015 and has it on a pdf document. 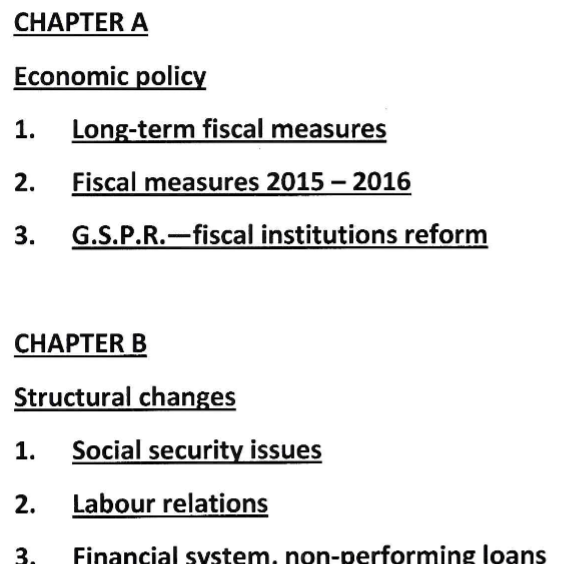 Key proposals of the draft  are among others:

Greek government aims at a restructuring of the debt burden for the years to come. According to the reform list, “an optimally legal ans economic solution” should be negotiated together with the European Commission, the European Central Bank (ECB) and the euro bailout fund ESM  until 30th June when it comes to the repayment of Greek government bonds, currently still in possession of the European Central Bank. The repayment of debts to the International Monetary Fund (IMF) is to take place in two phases: In the first phase, the IMF debt should be repaid as planned until 30 June. Subsequently, the repayment of the refinancing of the debt of the country is to be adapted, according to the paper.

Extra Tax on profits of large companies will bring €1 billion.

23% for other good and services, including some processed food items (jams, bread, meat etc)

Other revenues from Television licenses

Not before 62 years old

€11 billion revenues from privatizations by 2020

There are also measures for tax evasion etc.

PS At first sight, the proposals are not bad. For a change somebody plans to tax the rich of this country and not just the usual suspects of zero, low or medium incomes.