Breaking News
Home / News / Politics / Why does the majority of Greeks want to remain in the Euro?

Why does the majority of Greeks want to remain in the Euro?

In a poll conducted June 3rd and 4th but before Greece decided to ‘bundle’ its four trances to the IMF into, the overwhelming majority of Greeks responded that they wanted the country to remain in the eurozone and the Euro as currency. 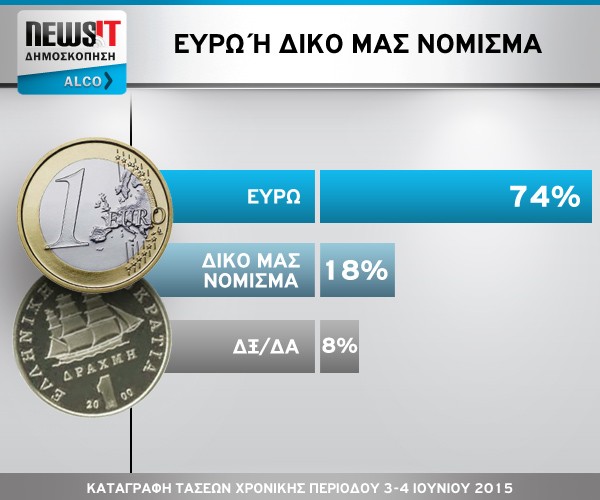 Question: Euro or Our own Currency?

Now, if you ask

why do Greeks want to remain in the euro despite all odds?

my suggestion is that:

after the fierce Grexit- scaremongering of the last 5 years and the strict austerity that caused people to lose more than 30% of their income, Greeks are afraid to exit the euro and have own currency that would be immediately devalued 40% to 50%, if not even to 60%. In addition, they take into consideration the outbreak of a economic and political instability.

An additional factor is people’s mistrust towards politicians and the local elites. I remember to have asked around about Euro or Drachma in 2012 and 2013 and the majority of my middle-class friends had told me: With drachma the usual people will make their profits again.

I am not sure that something has changed in June 2015 in people’s perception about politicians and the local elites.

However, two years ago, it was more than 80% of Greeks supporting the Euro. Apparently the scaremongering was more pressing at that time.

In other Poll results:

Question: Is the government on the right track in the way it negotiates with creditors?

Question: What should the gov’t do if Greek proposals not accepted?

47% want that the Govt’ proceeds to agreement with creditors even if it steps back from the “red lines“.

On the vote intention, SYRIZA seems to lose in respondents’ preference when compared to other recent polls.