Tourists and expats living in Greece will not be affected by the capital controls/ATM withdrawals, the Greek government said in a non-paper early Monday. Holders of credit and debit cards issued by Greek banks are not allowed to withdraw more than €60 daily.

The exception from the €60-daily-limit refers to owners of credits and debit cards that have been issued by foreign banks abroad.

Tourists and expats are allowed to make unlimited transactions and withdrawals from ATMs.

The limits imposed by these foreign banks apply to transactions and withdrawals. 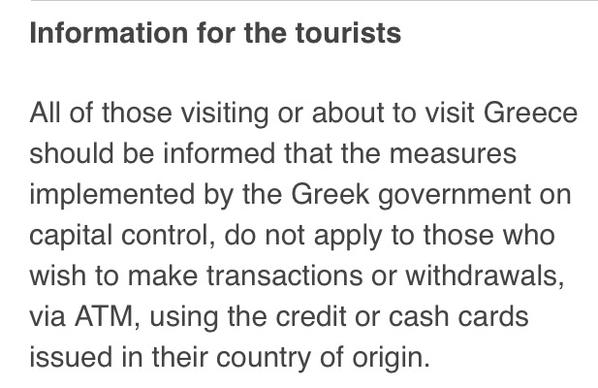 The Greek government imposed capital controls and closed the banks as of Monday, June 29th 2015, after the European Central Bank decided on Sunday to not increase the Emergency Liquidity Assistance to Greek banks.

The Bank holiday is expected to last 6 working days, that is until July 6th 2015.

As of Monday 11:00 am, the Greek Finance Ministry had not issued the detailed arrangements for capital controls and bank holiday. According to media, bank branches may open Monday noon for pensioners to withdraw their pensions.

Greeks have been massively withdrawing money since November 2014, when the previous government failed to reach an agreement with the creditors and accelerated Presidential and Parliamentary elections. Last Friday, the new left-wing/nationalists coalition government decided to walked out of deadlocked negotiations with creditors and announce Referendum on creditors’ proposals. After the ECB decision the Bank of Greece proposed the imposition of capital controls and bank holiday to stop the banks bleeding.

More than 40 billion have reported left Greek banks between November 2014 and June 2015.

@MehreenKhn @graemewearden take sterling. You will get a fantastic exchange rate