The President of the European Commission Jean-Claude Juncker is a very engaged man. He is so engaged that he decided to engage also in the Greek Referendum campaign. The self-declared “friend of Greece’ decided in fact not only to engage but to blatantly intervene into Greek internal affairs and open the eyes of Greek voters six days before the referendum on creditors’ proposal.

“I am very sad, I feel betrayed,” Juncker said as he was washing his hands in a bucket full of crystal clear water like a modern Pontious Pilate. Juncker must have gone – and still is going -through a real drama during negotiations

“This is not a game of liar’s poker. We are either all winners or we’re all losers. I’m am deeply sad. I feel somehow betrayed as my own efforts were not considered.”

*I’ll do everything I can to keep Greece in euro zone. Greece is a member of the European family, and I want this family to stay together.“

He also said among others:

*We’ve again and again talked on the highest political level, as was the wish of the Greek government.

*”There was never a deadline” *** Should I look for all Deadline-quotes by named and unnamed EU officials and EU politicians and Financial Ministers?

*The Greek people have to know the truth—not the watered-down version Athens is giving them.

*This is not the end of the process, we are still prepared to reach a deal.

*I’d like to ask the Greek people to vote ‘yes.’

*A ‘no’ vote would be disastrous, it would mean that Greece wants distance from euro and Europe.

*You shouldn’t commit suicide because you’re afraid of death.

And other nice things between truths & half-truths & lies & videos & EU named and unnamed officials quotes, but the best Jean-Claude Juncker said at last:

“The answer to referendum has to be YES whatever the question is”.

Even if the question is : Do you want to exit the Eurozone & Europe? 😛

Before addressing the Greeks, Chancellor Angela Merkel addressed her CDU-party friends on Monday morning and said:

“Europe will not sacrifice political and fiscal principals to keep Greece in euro.”

I suppose that after the addresses to the Greek nation that no European wants to live without, the EU leaders and their assistants rushed to their computer screen to monitor the markets plunging “as the Greek crisis deepens” as it is said nowadays.

#Greece is “no contagion factor for EZ anymore” 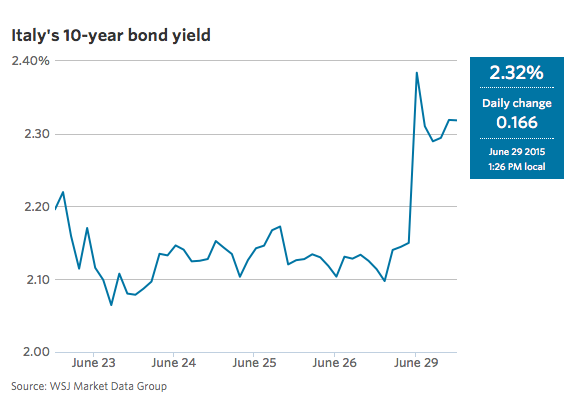 How foolish it was for #Juncker to come out with that suicide remark. Will hurt the families of those who have taken their lives in crisis.

A Evans-Pritchard ‏@AmbroseEP 1h1 hour ago

Forgot: Juncker‘s claim no demands for pensions is a corker. Knows there’s linked welfare exp cut, and phase out of low pension supplement

If Juncker thought that his speech would make people to vote yes, he needs to fire his speechwriter. Now.

More comments of majority of Greeks listening to Juncker are No-No’s as they contain words for adults only.