Pensions are exempted form any restrictions and according to latets media info, the finance ministry will announce at 4 pm Monday, which bank branches and for which hours they will be open, so that pensioners can go and withdraw their pensions. Many Greek elderly do not have debit cards. Some pension funds pay the pensions today.

Also note that when the banks will open again the cash withdrawal limit at the bank counter will be again 60 EUR per day and per account holder! 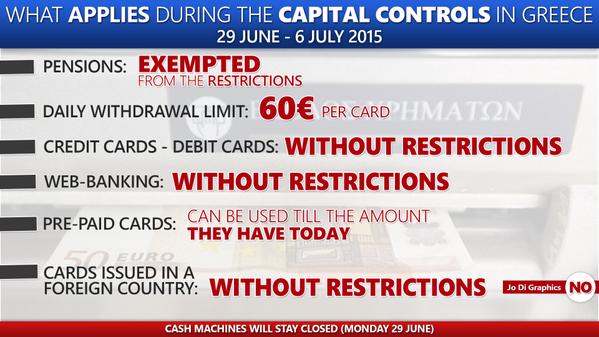 Infographic in ENG by JoeDiGraphics

ATMs are closed on June 29th, they may open after noon. There are reports that some people were able to withdraw their 60-euro from some ATMs though.

Please, send feedback if you face any problems.