There is a hurricane of rumors and leakages to local and international press about the “negotiations” between Greece and its creditors, about what’s next on economic level, after the country missed its payment to the IMF and the bailout program expired at midnight. One journalist claims this, another something different, a third cites “anonymous EU/GR or whatever sources,” a fourth apologizes for “misreporting” and “misunderstanding” official statements, a fifth makes up stories to influence the developments and political decisions, a sixth spreads rumors instead of facts, a seventh plays agent provocateur.

Political games are high on the agenda, and scaremongering is been raised to No One tactic in a war where “everything is believed to be fair” 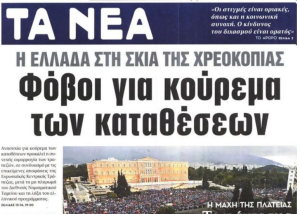 A little later, PASOK MP Andreas Loverdos told Mega TV that the ‘deposits haircut’ will not be as in Cyprus but “from the first euro.”

On Tuesday morning, previous government’s General Secretary for Revenues Haris Theoharis claimed in the Parliament that “Greek Treasury and Government officials were working out a plan to return to Drachma.”

For those Greeks who did not hear his claims, Theoharis repeated them on television and posted them on Twitter.

ENG: “A team from Greek Treasury in already in Maximos [prime ministry] working out a plan to return to drachma”

Theoharis repeated this claim at a panel of Private SΤΑΡ TV, the government commented that “this claim was a shame” but Theoharis insisted.

Theoharis was appointed to the post of General Secretary for Revenues by New Democracy & PASOK government and was fired 1-1.5 year later. He is now Parliamentary Group spokesman of To Potami.

Next to media people, there sit the politicians from ruling and opposition parties: depending on the party interest… there is absolute “chaos” especially when government and opposition lawmakers meet at television channels and they shout all together, making political dialogue to inform the public about the Referendum impossible. And then, there are politicians who try to change… laws via the TV.

“From a TV studio, Health Minister Panagiotis Kouroumplis “called on pharmacists to refrain from collecting insurers’self-participation on prescription medicine” due to the liquidity shortage on capital controls.

Prompt was the answer from Pharmacists’ Association who said” if the Heath Minister has such sensitivities he should officially scrap the self-participation on prescription medicine.”

In addition to this, the notorious Greek whiners, the representatives of the business world and the tourism, retailers, the organized groups of pharmacists, doctors, pensioners of certain sectors… you name it. They all add their sauce to the whole big fat Greek dish.

What is interesting is that these notorious Greek complainers have been complaining about everything and thus for last five consecutive years. They complain:

about austerity and taxes,  about profit cuts, about Value Added Tax hikes in tourism & restaurants, about new Memorandum of Understanding with creditors. And, of course, about capital controls and bank holiday. But they also complain about the Referendum and many of them will most likely vote YES out of notorious complain – or just some political interest.

Wednesday on the news:

1. “IKA-pensioners union wanted to launch a rally outside the Finance Ministry and several banks demanding that all pension money were been deposited in the banks. But they decided to postpone the rally as many pensioners were tired after the long ques on Wednesday morning.”

2. “The Economic Chamber of Commerce decided to vote YES at the Referendum”

Anyway, it is difficult to make it through this path of a hell of information.

Therefore, double check your sources and keep a small basket for the many cherries popping around in these difficult times for Greece.