Euro Leaders threaten Greece with “Grexit” and give “final deadline”

Euro Leaders agreed to give Greece a chance to submit new proposals by 8:30 a.m. Friday, July 10th. Two days later, a full Summit with all 28 European Union members will take place. A crucial decision will be taken: “to start negotiations for a two-year program,” as Merkel said or “proceed with Grexit” as Juncker threatened. But no worries: the EC President promised also “humanitarian aid”!

Prime Minister Alexis Tsipras committed to present a new request for a programme within the framework set by the ESM Treaty, incl. strict policy conditionality.

There have to be detailed proposals both short & medium term.

This evening we have not found a solution. Last week I said a NO would weaken the Greeks, they were very much weakened this evening.

Debt restructuring not on the table until October

We have a Grexit scenario, prepared in detail

I am not exaggeratedly optimistic of a solution to rescue Greece on Sunday but the summit had been called “because we think the situation is so dangerous”.

Asked if Greece could crash out of the euro zone if it failed to put forward convincing reform proposals, she said Sunday’s summit would decide whether to open negotiations on a two-year programme for Athens.

Countries outside the eurozone want to be in on these discussions, says Merkel, explaining reason for EU-28 summit

if Greek reform proposals are satisfactory and prior actions taken, short-term finance can be provided

Short-Term Mechanisms can be discussed once overhauls agreed, would be yied to implementing prior actions on overhauls

A haircut is not up for debate. That is a bailout under the treaties and that will not happen.

Bridge financing didn’t play any role in our talks tonight. It was whether there can be a 3rd programme

Preconditions for resumption of ESM program still not there at close of summit.

There was no discussion on introduction of alternate currency for Greece.

Tsipras is committed to present a new request for a programme within the framework set by the ESM Treaty, incl. strict policy conditionality

final deadline for Greece is Sunday

Greek bankruptcy would affect all Europe but Greece most worst. We have only five days left – this is a final deadline

After all this warning and threatening and blackmail coming from United Europe, PM Alexis Tsipras expressed

optimism for an Agreement by end of the week, despite ‘Euro’ Cassandras

* So much for ECB’s independence

“European Central Bank chief Mario Draghi assured euro zone leaders on Tuesday the ECB would do the necessary to keep Greek banks afloat until an EU summit on Sunday that will seek a deal on further aid to Greece, German Chancellor Angela Merkel said.“

PS it’s too early Wednesday for a comment… except: Milk, Sugar or Black? 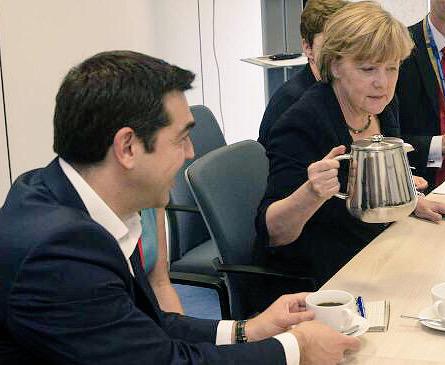