PM Tsipras: I ordered Varoufakis to prepare a contingency plan

Prime Minister Alexis Tsipras gave full coverage to former Finance Minister Yanis Varoufakis and said that he ordered the ex FinMin to work out an emergency  contingency plan but not a Grexit plan.

Speaking to the Greek Parliament after a question posed by PASOK leader Fofi Gennimatas, Tsipras said among others:

“Of course I instructed the Minister of Finance to set up a team to prepare a defense plan in case of emergency” and stressed that “the SYRIZA-ANEL coalition had no plans to exit the Eurozone but a crisis management plan.”

Varoufakis’s Plan B that included the introduction of a “parallel banking system” and the “hacking of taxpayers’ registration numbers” was revealed during a conference call with international hedge funds and triggered an outrage among not only opposition but also SYRIZA members. Varoufakis had said that he was acting following orders by PM Tsipras.

In the Parliament, the Prime Minister defended Varoufakis even though he criticized some of his policies.

“Instead of looking for responsibilities about the Grexit, you would better contact those who cultivated the Grexit. Haven’t you heard anything about the Plan B of Brussels with 1,000 pages?” Tsipras asked the opposition adding, “For the first time we heard that the European Commission was preparing such a plan in 2012. This plan has been continuously updated. The partners and lenders had a ready Grexit plan. Shouldn’t we asa government design our defenses? We had an obligation to the citizens to be prepare against such a possibility.”

Tsiporas vehemently denied that the government was preparing a Grexit Plan.

Tsipras defended Varoufakis plan to get access to taxpayers’ registration numbers saying that “this data base was useful for the euro” and said that Varoufakis made mistakes as Finance Minister. 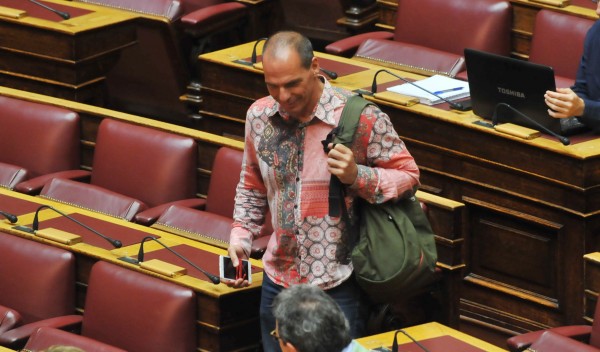 Talking about fancy shirts: Vartoufakis this morning in the Greek parliament
“Mr. Varoufakis may have responsibilities and have made mistakes. You can blame him for going to Aegina [island near Athens] or that he is not wearing nice shirts. But you cannot blame him that he is a ‘lamogio’ [gouger], that he wasted people’s money. or that he had a plan to drive the country to the rocks. Varoufakis did not hide in his drawer lists with fraudsters [Lagarde-list] as [ex PASOK Finance Ministers] Venizelos and Papaconstantinou did.”

Ηinting to PASOK scandals Tsipras told leader Genimmata to not throw stones to when sitting in the glasshouse.