That’s a true LOL story Made in Greece! The Culture Ministry has been systematically evading taxes for years or even decades or better say: state institutions have been depriving  the state from tax revenues. The incredible tax evasion was revealed at the museum of the the archaeological site of Knossos on the island of Crete, one of Greece’s top destinations. Not only the museum employees issue did not issue receipts for sales from the museum store,  but when they were force to do this… it was proven that the cash register was not even registered to the central tax revenues system. However, tax inspectors found out that the Knossos’s tax evasion  was not an isolated incident and that for all archaeological sites, the Ministry of Culture has only 2 cash registers connected to the tax revenues system.

After several complaints by tourists that they get no receipt when they purchase souvenirs from the Knossos Museum, Financial Crimes Units (SDOE) decided to take action. Pretending they were common tourists, the tax inspectors bought entrance tickets and for hours they kept watching and recording the transcriptions between the real tourists and the 8 museums employees.

During the whole inspection process, not a single receipt was issued; the employees could just write down the received amount of money on a book.

To penetrating inspectors’ questions the employees kept answering that they were following “orders from above”but were unable to define what exactly was the order and who was “the above”. It was surely not the Tax God Above…

The inspectors found 534 tax violations in form of not issuing receipts and thus in just one day and it was unclear for how long this situation had been going on.

They broadened the investigation and the first controls showed that the Culture Ministry has only 2 (two!) cash registers registered to tax authorities for all archaeological sites across Greece where millions of tourists make purchases each and every year.

The money collected from the sales made in the stores at archaeological sites is been transferred to the Archaeological Receipts [sic!]Fund, however -what an irony – without official receipts and invoices proving the accuracy of transactions, of referred values and assigned amounts.

On the inspectors’ question on “how employees are been checked” the answer was that there is an estimation of sales based on how many products the store has and how many have been sold. However, there is no inventory procedure taking place…

A last surprise was awaiting for the tax inspectors at the entrance of the Knossos archaeological site: two automatic machines selling souvenirs (copies of old coins) did not issue receipts as well, and no museum employee was able to say to whom or which company they belonged to. “They belong to someone in … Athens” was the answer. (via Cretalive)

News website tvxs.gr  that exclusively reported the story on Friday, asked the President of the Archaeological Resources Fund to comment on the issue. Aspasia Louvi-Kizi who assumed office 4 months ago, said that  the Fund is the collection mechanism of the Culture Ministry and added that “SDOE assists the Fund to put things in order and that the case will take the road to Justice.”

Minister of Culture Nikos Xydakis ordered a probe into the issue and stressed among others in a statement:

“We are awaiting the report of the tax authorities so we can immediately launch a procedure of disciplinary sanctions. There will be zero tolerance for civil servants who fail to defend the public interest.”

The culture and finance ministries declined to comment further on the matter.

PS So, now you know why there are no receipts when you buy souvenirs from stores of Greece’s archaeological sites. I just wonder, how things ‘function’ when tourists pay with credit or debit cards.

You may also now understand when we talk about “Greece’s cooked statistics and numbers”. It’s when the left hand has no idea what the right hand does…

Ever wondered why the ancient Minoans could not afford to buy some bras? Probably they were awaiting for the Bronze Age state institutions to give the state what the state belonged: the taxes… 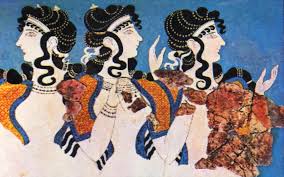 Or the Minotaur had swallowed the cash register.