Greeks are stunned. Possibly, also some members of the Independent Greeks, Tsipras’ junior coalition partner, wonder about the appointment of Dimitris Kammenos from ANEL as deputy minister in the new cabinet.

The ANEL lawmaker has been known in the local tweeter-sphere for his antisemitic, racist and homophobic stance as well as for his vulgar language. And this man is now deputy minister for Transportation, Infrastructure and Networks.

Dimitris Kammenos was active in social media and quite known. Through his Twitter account @PortaPorta (Door-to-Door) and his Facebook profile, Dimitris Kammenos was taking position to issues like the gay parade, the 9/11- attacks, the European Union. His stance was clearly xenophobic, homophobic and antisemitic. He was spreading inflammatory and conspiratorial comments, incl alleged plots. Not to mention his attacks against Tsipras but this we have seen also in other coalition governments.

In addition to all these phobias and conspiracy theories spreading attitude,  Kammenos had also another problem: his language style occasionally has been so extremely vulgar that I cannot dare to translate some hos his tweets.

And then this man is suddenly a minister? Late Tuesday night, when the PM’s office announced the names of the cabinet ministers, it needed just a few minutes, to spark an outrage first of all among the Twitter users.

When the shitstorm hit the Twitter fan, Dimitris Kmmenos started to  block one by one his critics but then he deleted his account all together. In his last tweet, he even threatened internet users that he will find them making use of his ministerial post! 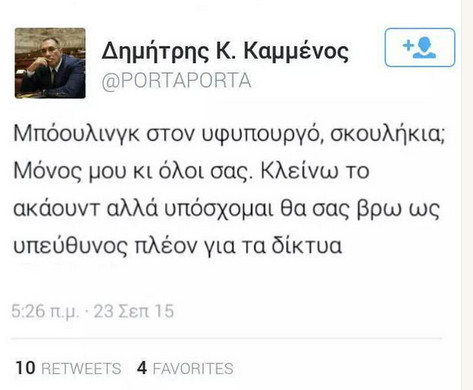 translation: “Bowling to the deputy minister, worms? Alone and all of you. I close my account but I promise to find you as responsible for the networks.”  [ KTG note: by “μπόουλινγκ’ bowling he meant bulling…]

Too bad that some Twitter users had made copy paste in webcaches and screen shots using every possible technology tool.

Translation: “9/11 And don’t forget. From the 2,500 Jews working at the Twin Towers nobody went to work that day.”

Several hours after his sworn in,  Dimitris Kammenos made a statement claiming that his criticism-drowning tweets and FB posts were possibly due to hackers and maybe by some of the more than fifteen (15!!!) administrators of his social media accounts.

“I personally seek to apologize for the posts and I categorically condemn racism, homophobia and antisemitism,” his statement read among others.

He further claimed that his social media accounts have been hacked already four times in the past.

However, when his post  of the photo-shopped entrance of Nazi’s concentration camp Auschwitz drew the condemnation by the Central Board of Jewish Communities in Greece, Kammenos did not claim any hacking or malicious “administrators”. He claimed, it was simply a “misunderstanding”. That was on June 24th 2015.

Independent Greeks distanced itself from the post and Kammenos apologized. He claimed there had been a “misunderstanding.”

“Maybe the comparison was unfortunate but my country is experiencing an economic holocaust,” he wrote on Facebook.

Despite the official apologies today, the outrage did not settle, while SYRIZA MP Vassiliki Katrivanou asked PM Alexis Tsipras to fire Dimitris Kammenos.

“I feel deeply ashamed and regret that a left government, led by SYRIZA, makes a minister Dimitris Glowing, who systematically makes miserable homophobic and anti-Semitic comments on his Twitter. The content and character of his tweets fit only in the extreme right, and brutally insult not only those targeted by him  but any decent man. His dismissal from the government is necessary and urgent. “

It is not only Katrivanou inside SYRIZA who feels offended that such a personality with such extreme views is a minister of the left-wing government. According to latest information in Greek media, PM Alexis Tsipras had a phone conversation with his coalition partner Panos Kammenos and asked him to investigate the authenticity of Dimitris Kammenos tweets.

Sources form the PM office said that, if the tweets are authentic, this cannot be consistent with the values and ethics of the coalition. In case the tweets were authentic, the PM asked Panos Kammenos to “consider the possibility of replacing the Deputy Minister,” the same sources said.

I don’t know how long the authenticity investigation takes, but I am sure it could be as short as a phone call long between Kammenos and Kammenos. Both Kammenos are not related to each other.

And then the deputy minister Kammenos will have to resign claiming misunderstanding, hacking or just a bad hair decade. Or anything.

PS He cannot stay even an hour longer in the cabinet. Period.

Translation: Until the truth is out on the antisemitic and racist posts the deputy minister will make things easier with his resignation.

There can’t be a clearer message to Dimitris Kammenos, can it?

But Kammenos is no the first to resign in zero-time. Correction: Deputy Maritime Minister Giorgos Vernikos had to resign six day after he after his appointment on June 20th 2012 under New Democracy/PASOK/Democratic Left government. Shipowner Vernikos was owner of an off-shore company which was incompatible with his ministerial post and forbidden by law. It was SYRIZA that had raised the off-shore issue.

Half an hour later than ANEL-leader’s tweet, Dimitris Kammenos announced his resignation in order to allow “the smooth operation of the government,”as he said in a statement.

Further he said had contacted the Cyber Crime Department of the Police to investigate his social media accounts. “A team of experts searched the accounts but with no result.” Dimitris Kammenos concluded that he “will sue unknown individuals” and repeated that his accounts were hacked.