“Frustration” should be a Greek word: Brain-Drain is easy among technology developers

September 27, 2015 Society Comments Off on “Frustration” should be a Greek word: Brain-Drain is easy among technology developers 86 Views

Frustration in Greece is Problem No 1. You try and try and you hit wall. Again and again. Most of the time. Especially, when you have to deal with the state. In their free time and without any funding, a group of students developed an Application that provides useful information about faculties to university students. When they approached the national higher education institutions to offer their product the reply they received was the usual: “NEGATIVE”. Why was that? Because apparently, the universities had no personnel to “send the necessary e-mail with updates.” Do you believe that? you should…

Below is the translation of the post one of the application developers Dimitris Kanellis posted on Facebook.

” Do you want me to tell you why nothing will ever change in Greece? Because nobody wants anything to change.

In our free time and without funding whatsoever, we developed an application for students throughout Greece.

right or wrong, but obviously, the application is based on information that has t be provided by the institutions and, of course, this information must be update immediately.

Do you want to hear now the paradox?

For three months. we were begging the higher education institutions to adopt the application and thus without any charge.

Do you want to hear the even more paradoxical?

Since we know that delivering to them a complicated Dashboard [to make the updates directly] we offered them that they send us an e-mail every time some new information had to be added or updated.

But it seems that also something so simple like an e-mail is not that simple as someone would think.

From one university rector we heard the comment “where shall I find a person to do this job?”

All the others did not tell us anything or they forwarded us from one to the next on the phone or told us to get back to them ‘next month’.

I am not in distress because I am sure that in 5-10 years they will develop a formal application for the universities and each institution will have to pay 10,000 euro.

And I know why I am not in distress? Because I – and every “I”- pack my things together and go abroad where I can be creative.

If you don;t want to change anything once, I don’t want ten times.

PS A similar application in the Netherlands charge universities for each student who uses the application.

PS (2) Excluded from the indifference for the moment is the rector of the University Macedonia who responded immediately and cooperated with us just a few days after our first communication.(via newsone.gr)

The name of the Application is Studdle.

It provides information on faculty programs and schedules, exams, e-class, personnel strikes, instructions on how to reach the schools with public transport means, bookstores nearby and other useful information. 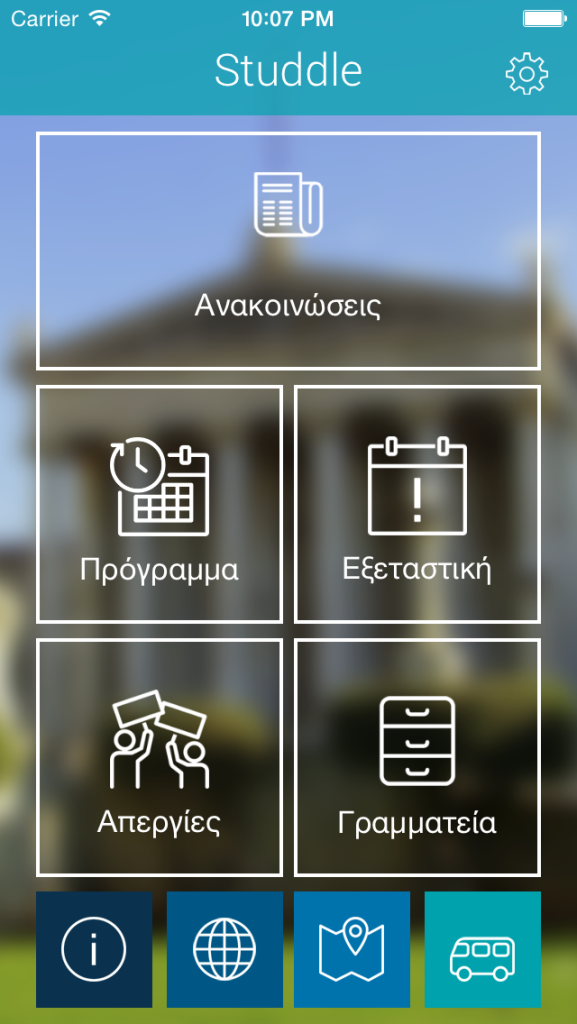 These is how things work in Greece: you have a new idea to offer to state institutions? it has to be forwarded through the “right channels” otherwise one has no chance to see his technology or any other idea being accepted.

One had to belong to the privileged circle of the “choose ones” who would share the pie and the state money among themselves.

PS We just hope with PM Alexis Tsipras and the left-wing “things will only get better.” The Prime Minister told his newly appointed cabinet that “top priority was to combat corruption and intermingling”, right?